Susan B. Anthony and Her Strong Utah Ties

Susan B. Anthony and Her Strong Utah Ties 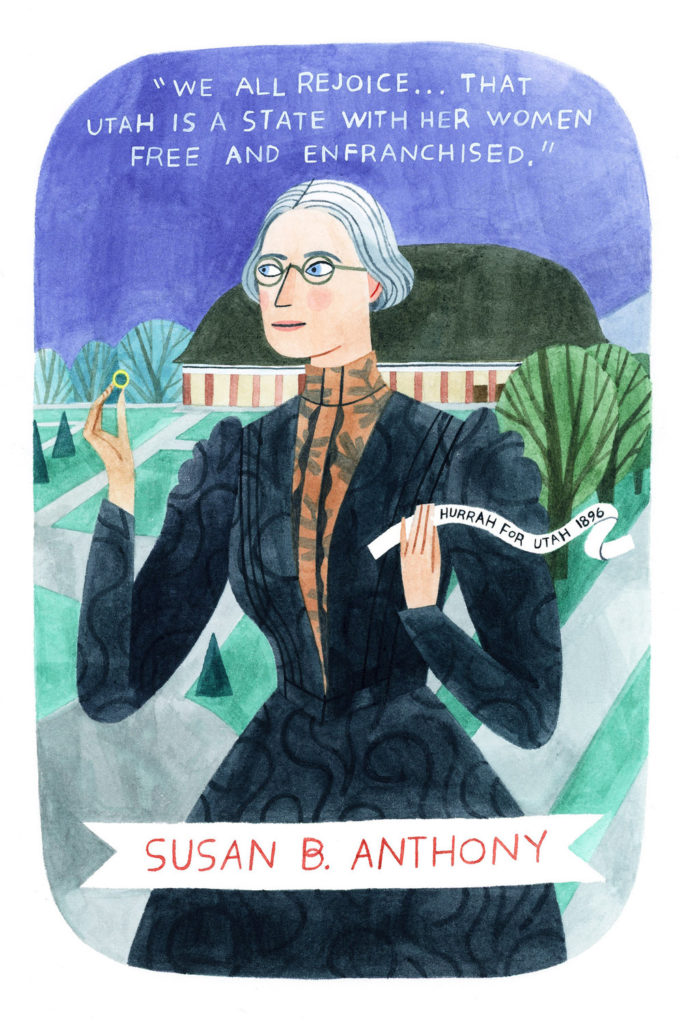 Like many American suffragists, Susan Brownell Anthony (1820 – 1906) began her activism by working to abolish slavery. Raised in upstate New York in the Quaker tradition, she became passionate about social equality and started collecting anti-slavery petitions when she was just sixteen. In 1856 she became New York’s agent for the American Anti-Slavery Society.  She also worked with Harriet Tubman in the Underground Railroad; Tubman later joined Anthony in the women’s rights movement.

In 1851, Anthony met Elizabeth Cady Stanton, who three years earlier had organized the nation’s first women’s rights convention in her hometown of Seneca Falls, New York. The two women became fast friends and co-workers, spending their lives fighting for the women’s ballot that they themselves would not live long enough to cast. In 1869 they organized the National Woman Suffrage Association and served as its president and vice-president. 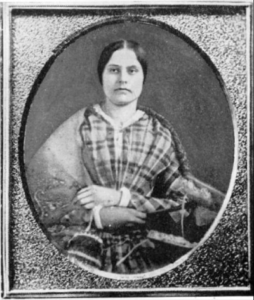 Anthony is arguably America’s best-known suffragist, but her ties to Utah are lesser known. The year after Utah women became the first in the modern nation to exercise voting rights (on February 14, 1870), Anthony and Stanton visited the territory. There they spoke in the recently completed Salt Lake Tabernacle, congratulating Utah for granting women the ballot.

Even though she opposed the Mormons’ practice of polygamy, Anthony staunchly supported Mormon women’s voting rights. Though it cost her politically, she offered her friendship to polygamous suffragists and invited them to participate in national suffrage conventions when others turned their backs on them. Anthony formed an enduring friendship with Utah’s leading suffragist, Emmeline B. Wells.

To show their appreciation, women of Utah sent Anthony a bolt of black silk produced in their woman-owned silk industry. Anthony had a cherished dress made from the silk, which today is displayed in her bedroom at the National Susan B. Anthony Museum & House in Rochester, New York. 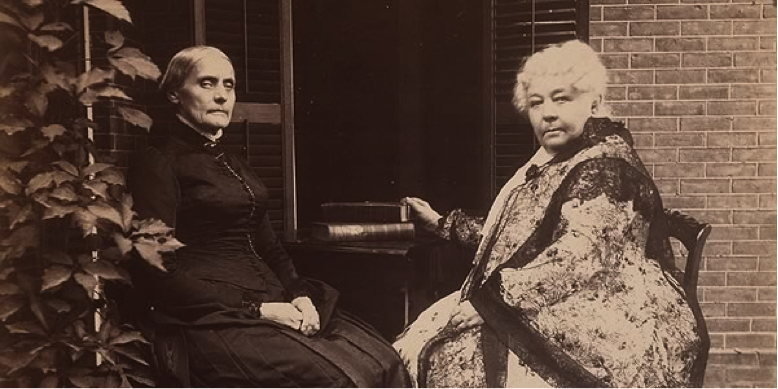 Anthony and Stanton in their later years.

After Congress revoked the voting rights of all Utah women through the Edmunds-Tucker Act of 1887, Anthony mentored Utah suffragists on how to win those rights back. As Utah delegates prepared to submit a constitution for their 1895 application for statehood, Anthony urged Utah suffragists to ensure that a clause guaranteeing suffrage, regardless of gender, be included in the constitution. “Now in the formative period of your constitution is the time to establish justice and equality to all the people,” she wrote Emmeline Wells. “That adjective ‘male’ once admitted into your organic law, will remain there. Don’t be cajoled into believing otherwise.”[i] 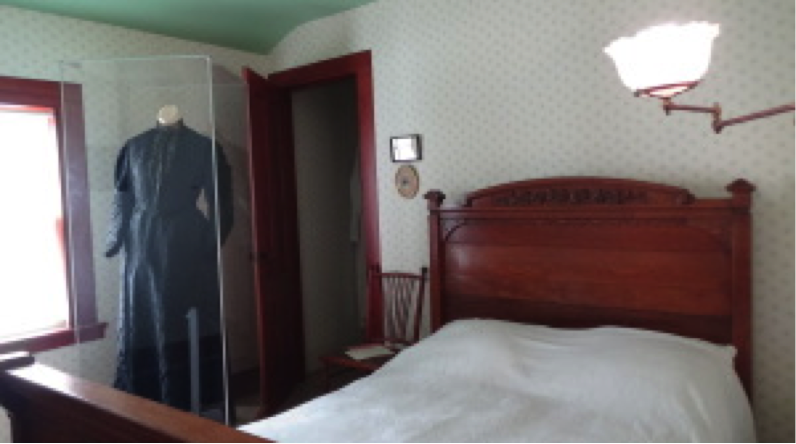 Led by Wells, women throughout Utah lobbied the all-male delegates to include in the state constitution a clause guaranteeing women’s rights to vote and hold public office. After Wells telegraphed Anthony to announce that goal was realized, Anthony quickly replied, “Hurrah for Utah, No. 3 State—that establishes a genuine ‘Republican Form of Government.’”[i] When Utah officially became a state on January 4, 1896, it also became the third state, after Wyoming and Colorado, to grant woman suffrage.

Just as she had done after Utah Territory granted women the vote in 1870, Anthony personally congratulated Utah again in 1895, speaking to a crowd of 6,000 in the Salt Lake Tabernacle during the Rocky Mountain suffrage convention. “Justice is what every human being longs for,” she said, “and therefore I today congratulate you upon this auspicious moment when the Territory of Utah is about to become a state, that the women who for the last few years have been disfranchised—not by the law of the Territory, but by national legislation—will be restored to their just right.” Utah suffragists Emily and Franklin S. Richards opened their Avenues home for a reception for Anthony, attended by hundreds. 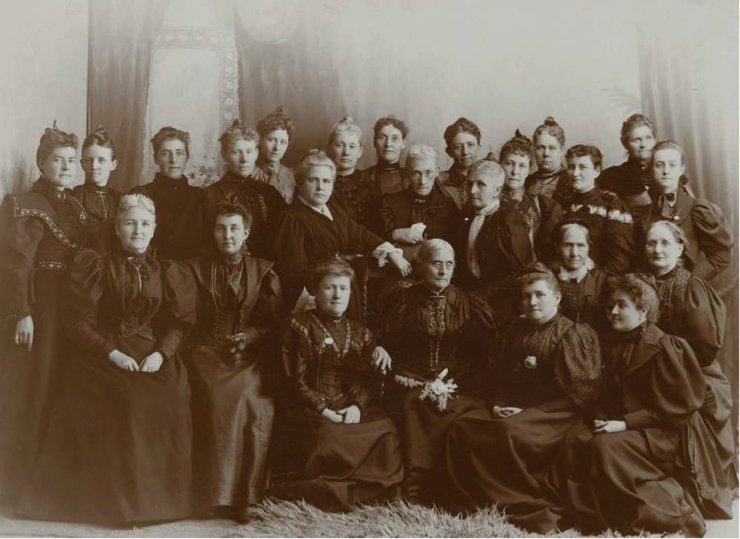 In 1906, at the age of eighty-six, Anthony died from pneumonia. On the day of her death, she had one of her gold rings sent to Emmeline Wells in Utah, a symbol of her friendship and legacy. Anthony was so beloved in Utah that upon her death, a memorial service was held for her in the Salt Lake Tabernacle, whose interior had twice reverberated with the strength of her voice. Though she died fourteen years before the 19th Amendment passed, Anthony left an indelible imprint on the state and on the nation. “Failure is impossible,” was her best-known motto, and time proved her right.

About our Illustration:  We have pictured Susan B. Anthony here standing in front of the Tabernacle, where she spoke several times, as it looked in the late 19th century, with its copper roof. In 1896, after women’s suffrage had been included in the state constitution, Anthony sent a telegram of congratulations: “Hurrah for Utah!” She is holding that telegram here. Additionally, on her deathbed, Anthony bequeathed a gold ring to Emmeline B. Wells as a symbol of their deep friendship and partnership over the decades. Anthony is holding that ring in the illustration. Anthony is also wearing the black dress made from Utah Silk that Emmeline and the women of Utah sent to Anthony.