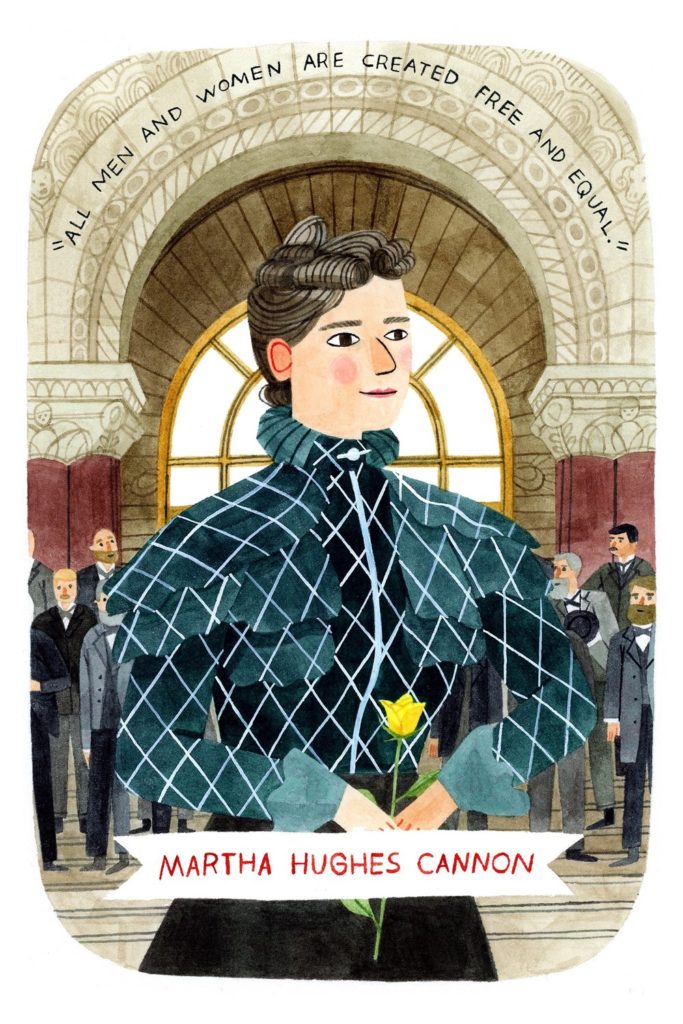 Born in Wales, young Mattie immigrated with her family to Utah Territory to join the Latter-day Saints. Deeply impacted by the deaths of her baby sister and father, bright and independent Mattie aspired to be a medical doctor at a time when women rarely even went to college. While pursuing her chemistry degree at the University of Deseret (now the University of Utah), she worked as a typesetter at the Woman’s Exponent, where she  became immersed in the women’s rights movement, mentored by Emmeline B. Wells. Mattie earned her medical degree from the University of Michigan in 1881 and a Bachelor of Science degree in the Department of Auxiliary Medicine at the University of Pennsylvania in 1882, where she was the only female student. The men in her program received the degree of Ph.D. Mattie displayed exceptional public speaking skills and simultaneously earned a degree from the National School of Elocution and Oratory in Philadelphia. 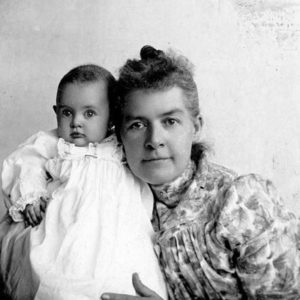 Of motherhood, Martha Hughes Cannon said, “You give me a woman who thinks about something besides cook stoves and wash tubs and baby flannels, and I’ll show you, nine times out of ten, a successful mother.” Martha with her daughter. Photo courtesy of the Utah State Historical Society.

As a leader in the Woman Suffrage Association of Utah, Mattie testified to United States congressional committees on Utah women’s suffrage work and was a featured speaker at the Women’s Congress of the World’s Columbian Exposition of 1893 as well as the 1898 Seneca Falls 50th celebration in Washington, D.C. She strongly advocated for women’s rights based on equality, arguing that “one of the principal reasons why women should vote—is that all men and women are created free and equal.”

When Utah gained statehood in 1896 and the women of Utah regained the franchise, Mattie ran as a Democrat in an at-large election for one of five senate positions in the new state’s first legislature. Her husband, as well as Mattie’s friend and mentor Emmeline B. Wells, were also on the ballot as Republican candidates. Mattie’s victory garnered national attention not only because she was the first woman elected to a state senate but also because she ran against and defeated her own husband. She served one, four-year term with the otherwise all-male Utah Senate in the Salt Lake City and County Building. 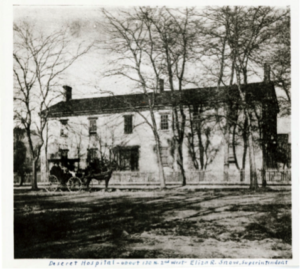 In an interview with the San Francisco Examiner following her election, Mattie called for a wider sphere for women, explaining: “You give me a woman who thinks about something besides cook stoves and wash tubs and baby flannels, and I’ll show you, nine times out of ten, a successful mother.” She struck an often difficult balance between the demands of motherhood to her three children and her passion for public service and health. During her four years as a Utah state senator, Mattie continued to practice medicine and proposed several legislative bills that revolutionized public health in Utah. Expressing a philosophy that defined her approach to life, Mattie Hughes Cannon urged: “[L]et us not waste our talents in the cauldron of modern nothingness, but strive to become women of intellect, and endeavor to do some little good while we live in this protracted gleam called life.” 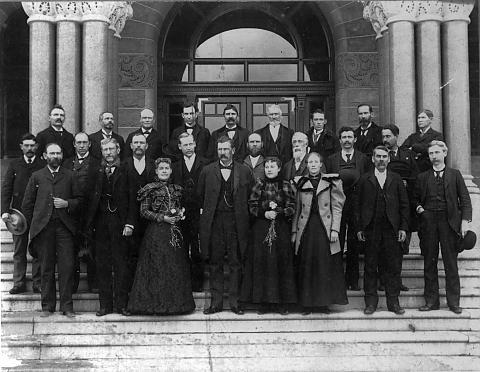 Martha Hughes Cannon (left of center), the first female state senator in the United States, with the rest of Utah’s senate on the steps of the Salt Lake City and County Building, 1897. The other two women in the photo were clerks for the senate. Photo courtesy of the Utah State Historical Society.

About the Illustration: In the Better Days 2020 illustration, we’ve captured Mattie as she appeared in the 1897 photograph of the Utah State Legislature (bottom photo), standing on the steps of the City and County Building where the legislature met at that time. The building still stands in downtown Salt Lake City today. She is wearing the same dress and holding a flower, as she is in the photo. We’ve chosen to make the flower a yellow rose, the symbol of the national suffrage movement.