Our mission at Better Days 2020 is to share the stories of Utah women – who were the first women citizens in the U.S. to vote under a women’s equal suffrage law! We’re pretty proud of that fact, so let’s take a closer look at where Utah’s women voters fit in the nation’s history.

Utah’s first female voter was Seraph Young, a twenty-three year old schoolteacher who cast her historic ballot in Salt Lake City’s Council Hall on her way to work on February 14, 1870. This made her the first woman to vote in the United States under a law that gave women equal suffrage rights with men.

Many people have a question when they learn about Seraph: what about Wyoming? Some people know that Wyoming Territory was the first to grant suffrage to women citizens, in December 1869. What they don’t often know is that Utah Territory followed two months later, in February 1870.[1] Utah held two elections where women citizens voted before Wyoming had its first, so that meant Utah women were the first to exercise their voting rights. Utah’s first election with women’s suffrage was Salt Lake City’s municipal election on Valentine’s Day 1870, when Seraph Young and about 25 other women cast ballots just two days after women’s suffrage had become law. Later that year, several thousand women voted in Utah’s general election held on August 1.[2] Wyoming’s first election held with women’s suffrage was on September 6, 1870.

So in 1870, Utah women citizens were the first in the U.S. to vote with equal suffrage rights as men. But there had previously been a few circumstances where some women were able to vote with restricted suffrage rights that limited their participation.[3] Back in 1776, during the American Revolution, New Jersey ratified a constitution extending voting rights to all adult residents who owned property worth £50. Because New Jersey didn’t enact race or gender restrictions on voting rights, this law enfranchised a small number of free black men and unmarried and widowed women (married women could not legally own property) who owned enough to meet the property requirement. This small number of women and black men were able to vote for a few decades.

When the U.S. Constitution was ratified in 1787, it let states determine voters’ qualifications. New Jersey was the only state that did not specify voters had to be white men. In fact, the state legislature of New Jersey passed laws in the 1790s explicitly stating that women could vote if they met the other requirements, but in 1807 legislators changed the law to restrict voting rights to free white males who were taxpayers. This disfranchised the women and African Americans who had previously been able to vote. Women wouldn’t vote in statewide (or territory-wide) elections again until Utah women did so on August 1, 1870. 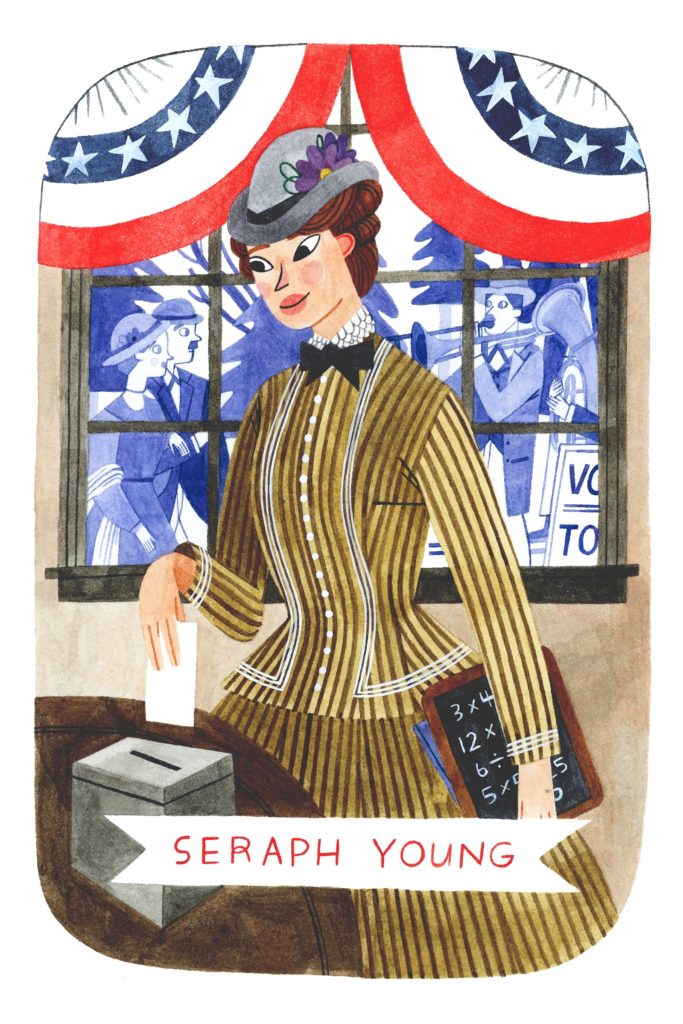 Seraph Young, the first woman to legally vote in Utah and the nation. Illustration by Brooke Smart.

Early American women played indispensable roles in their communities and their nation, but it took more than a century for male lawmakers to entrust them with voting rights on a nationwide scale. Change initially came at the state and local levels, moving slowly from west to east. By the Civil War, some women had gained a limited right to vote in local school elections in Kentucky (1838) and Kansas (1861). The pace didn’t quicken after the Civil War, despite suffrage organizations’ nationwide campaigns for women’s voting rights.

Utah women citizens became the first to cast ballots with truly equal suffrage in 1870. They lost their voting rights in 1887 through Congressional legislation and regained them in the new Utah state constitution of 1896–by that time, Wyoming and Colorado were the only other states where women could vote.[4] By 1910, there were just five (Idaho and Washington state had joined the ranks). Still, despite slow progress in the rest of the nation, by the time the 19th Amendment was ratified in 1920, after a more than 70-year struggle, Utah women had been casting ballots for a total of 41 years.

Still, the victories of 1870, 1896, and 1920 didn’t mean that all women in Utah or the rest of the nation could vote. While women couldn’t be kept from the polls simply because of their gender, Native Americans and immigrants were legally barred from U.S. citizenship (a requirement for voting). Laws enacted in many states made it effectively impossible for African Americans to vote. While many of these barriers have been removed over time, the work continues to protect women’s rights and minority rights in Utah and throughout the nation.

You can learn more about Utah women’s work for suffrage and civil rights for all people at www.utahwomenshistory.org.

·    “Gaining, Losing, and Winning Back the Vote: The Story of Utah Women’s Suffrage”

“For a Few Decades in the 18th Century, Women and African-Americans Could Vote in New Jersey.”

[1] “An Act, Conferring Upon Women the Elective Franchise,” in Acts, Resolutions and Memorials of the Territory of Utah, Passed at the Nineteenth Annual Session of the Legislature, 1870 (Salt Lake City: Joseph Bull, Public Printer, 1870), 8.