“None Of The Unpleasant Results Have Occurred”

“None Of The Unpleasant Results Have Occurred”

On February 15, 1898, Susan B. Anthony led a delegation of women and men up the steps of the U.S. Capitol to speak in support of women’s suffrage. It was her 78th birthday, and the fifteenth time she had testified before Congress in the long struggle for women’s voting rights. One of the seventeen people who joined Anthony that day was Utah State Senator Martha Hughes Cannon. Senator Cannon had travelled to Washington, D.C. to participate in the National Woman’s Suffrage Convention and had been invited to testify about the “practical working of woman suffrage” in Utah, where women had recently regained the right to vote with Utah statehood on January 4, 1896. Dr. Martha Hughes Cannon had been elected later that year as the country’s first female state senator. 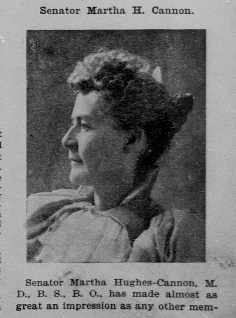 In front of the House Judiciary Committee and a packed crowd of observers, Miss Anthony introduced testimony about what women’s suffrage looked like in the few places where women could legally vote. Speakers represented the suffrage states of Wyoming, Colorado, Utah, and Idaho, as well as Kansas, where women could vote in local elections. Each person who testified sought to counter popular anti-suffrage arguments that voting would degrade women or make them mannish. They noted that the real experience of women in their state suggested the opposite: that women influenced politics for good and that expressing political interests did not lead them to neglect their domestic duties.

Senator Cannon had earned a degree in elocution (public speaking) from the National School of Elocution and Oratory in Philadelphia, and she was used to speaking to large crowds. In front of perhaps her most distinguished audience yet, she employed those skills in an eloquent defense of women’s suffrage based on women’s natural rights and the benefits to society when they were empowered to participate in political decision-making. Her testimony began by recalling Utah women’s successful efforts to push for the inclusion of women’s suffrage and full political equality in the state constitution approved in 1895. Although this effort had faced opposition, she declared that the actual state of affairs in Utah after women gained expanded rights was “as a complete vindication of the efforts of equal suffragists…None of the unpleasant results which were predicted have occurred.”

Instead, Senator Cannon argued, Utah women’s exercise of the vote had “proved to the world that woman is not only a helpmeet by the fireside, but when allowed to do so she can become a most powerful factor in the affairs of the government.” This echoed many pro-suffrage arguments at the time that men could and should welcome women’s contributions to the work of government because women could help solve sticky problems and support moral legislation.

Senator Cannon then turned to the effect of suffrage on the women themselves. “Before suffrage was granted to women they had ideas upon public questions,” she reminded her listeners. “Suffrage has given them opportunity for practical expression of these views.” At a time when many Americans believed women were not naturally interested in politics, Senator Cannon made the case that women would grow and develop capacities to fulfill the opportunities afforded them. To assuage worries that this involvement in public life would sully women’s morality, Senator Cannon showed that women were better than that. “Women have quietly assumed the added power which always was theirs by right,” she said, “and with…grace and ready adaptation…they have so conducted themselves that they have gained admiration and respect while losing none of their old-time prestige.”

Senator Cannon’s testimony that women deserved to be political actors was important for the national suffrage movement, which was seeking to capitalize on the latest victories with both Utah and Idaho granting women’s suffrage in 1896. Still, despite the strong evidence that women’s suffrage had not brought harm in the West, Congress wasn’t easily convinced to support women’s right to vote. The House Judiciary Committee would hold at least eleven more hearings on women’s suffrage, and it would be 20 years before any House Committee would recommend the passage of a constitutional amendment for women’s suffrage.

Although Utah women gained the right to vote—twice—decades before the Nineteenth Amendment was ratified in 1920, leading Utah women like Martha Hughes Cannon played an important role in that national struggle.