On This Day: A Mother’s Influence

On This Day: A Mother’s Influence

On this day in history, August 18, 1920, Tennessee’s youngest state representative, Harry T. Burn, sat in his Nashville hotel room, poring over a letter from his mother. Postmarked August 17, most of the seven-page note was inconsequential, even mundane. It was rainy. Uncle Bill had stopped by. Would Harry be home for Labor Day? But there was one line Burn couldn’t stop reading: “Hurrah and vote for suffrage,” his mother, Phoebe Ensminger Burn (Febb to her friends) wrote. “Don’t keep them in doubt.” Burn folded the letter and put it in his pocket. Then he pinned a red rose to his lapel and walked out the door.

The streets of Nashville were crowded that morning. Suffragists and anti-suffragists, both Tennessee locals and national visitors, had been flooding the state capital ever since Governor A. H. Roberts called a special session of the state congress to vote on what could become the 19th Amendment to the Constitution. Identified by the color of rose they wore pinned to their dress or suit, the lobbyists from both sides kept busy picketing, petitioning, praying, and at times bribing and blackmailing, each trying to outwork the other to achieve their goal. 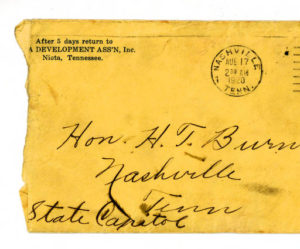 Suffragists, those wearing yellow roses, had spent the last seventy years since the Seneca Falls Convention petitioning and campaigning for the right to vote. Now they were tantalizingly close to achieving their goal. Over the last fourteen months since Congress had passed the suffrage amendment, 35 of the 48 states had ratified. Just one more state needed to do the same for the amendment to have the necessary support of three-fourths of the states to officially become law. But as of August 16, only two states remained in a position to ratify. The other eleven had already voted to reject or table the amendment, and on August 17, North Carolina joined the latter group. The weight of responsibility for 27 million women’s enfranchisement fell directly on Tennessee’s divided shoulders.

Harry T. Burn had hoped that it wouldn’t come down to this. He needed more time to think. He needed to consider his upcoming re-election and his anti-suffragist constituents at home in McCinn County. And then there was the fact that he was already wearing the red anti-suffragist rose.

He also needed to think about the letter Representative Joseph Hanover had read to the assembly the day before from California governor William Stephens, who said that his state had only benefited from women’s increased involvement, and that Tennessee had the chance to do “an act of profound justice to the women of the nation.” 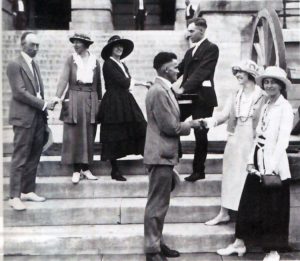 Suffragists and legislators outside the Tennessee State Capitol.

Most importantly, he needed to think about his mother, Febb, the intelligent, feisty, college educated widow and successful farmer. All of her illiterate, uninformed male tenants could vote. But she could not. 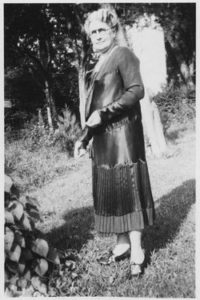 Too soon, the clerk reached his name. Harry cleared his throat. “Aye.” Every head in the Assembly turned to stare at the 24-year-old upstart. Nobody could believe their ears. He’d probably misspoke. Burn raised his chin defiantly. The vote ended, 49 votes for women’s suffrage, 47 against.

Pandemonium broke out on the floor and in the galleries. Amidst the roar of outraged shouts and overjoyed cheers, Harry T. Burn accepted a yellow rose from a neighbor and pinned it to his jacket over his mother’s letter. He dropped his old red rose to the floor. Then he was ushered to the attic of the Capitol Building to wait for the crowds to die down so he could go and change hotels. It would not be safe for him to travel home to his mother without a bodyguard for several months. 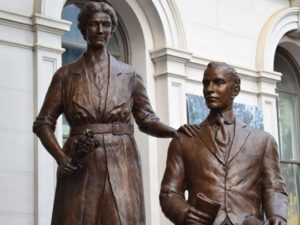 But despite the myriad physical threats, assaults, and verbal and moral attacks on both his mother and himself, Harry stood by his vote, and Febb refused to disavow her letter. In a personal statement Harry published in the House Journal, he defended his vote, saying, “A mother’s advice is always safest for a boy to follow, and my mother wanted me to vote for ratification.”

That November, millions of women all over the nation headed to the polls to vote in the 1920 presidential election. For some it was their first time. For others, such as the Utah women who had gained suffrage first in 1870 and then again in 1896, it wasn’t new. But whether they were new or experienced voters, each of the women felt the thrill of finally sharing their insights, opinions, and wisdom not just with their sons and daughters, but with their leaders, states, and nation as well.

Still, there were many women who weren’t able to cast ballots in the 1920 election. The 19th Amendment was a large step forward, but many women (and men) were still kept from the polls by discriminatory state laws such as poll taxes and literacy tests. Suffrage work continued for decades to come, leading to additional legislation to protect the suffrage rights of people of color. To learn more about this work, check out our series of articles on women of color who worked for voting rights.