On This Day: Seneca Falls Convention

On This Day: Seneca Falls Convention

One hundred seventy years ago today, on July 19, 1848, thirteen-year-old Daniel Cady Eaton broke into the Wesleyan Methodist Chapel with both his aunt’s blessing and her assistance.Once inside, he made his way to the front of the church and unlocked the heavy doors to let in a crowd of women and a handful of men, who had come to Seneca Falls for the first official women’s rights convention in modern American history. 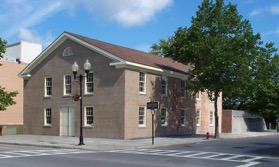 Between 1840 and 1848, they revisited this idea several times, but never felt that the circumstances were quite right. Finally, on July 9, 1848, in Waterloo, New York, Stanton reintroduced the idea at a tea party being held in Mott’s honor. In addition to Mott and Stanton, the luncheon was also attended by Jane Hunt, the hostess, Martha Coffin Wright, Mott’s younger sister, and Mary Ann M’Clintock, Mott’s old friend and co-founder of the Philadelphia Female Anti-Slavery Society. Stanton spoke “with such vehemence and indignation” at the current treatment of herself and other women she knew and loved that she “stirred [herself] as well as the rest of the party, to do and dare anything,” even plan and execute a revolutionary women’s rights convention. 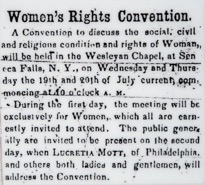 They had only ten days in which to do so. Mott, who would be the convention’s keynote speaker and main attraction, was only in western New York for a brief visit. The convention had to be held before she left. Working together, the women were able to plan a two-day, six-session convention “to discuss the social, civil, and religious condition and rights of Woman.” Only a few small details were overlooked, such as making sure Wesleyan Chapel’s minister unlocked the doors for the women on the morning of July 19.

Other than this brief initial wrinkle, the first day of the convention ran smoothly. In the morning, Stanton and Mott spoke to the convention, emboldening the crowd to take responsibility for their own lives and encourage their sisters to do the same. Stanton also read the Declaration of Sentiments, a document crafted in the spirit of the Declaration of Independence, which would become the manifesto of the women’s rights movement. It boldly stated, “We hold these truths to be self-evident: that all men and women are created equal.” The convention reviewed the Declaration paragraph by paragraph, discussing and, on occasion, amending it as they went.

This work took them the majority of the morning and afternoon sessions, though the participants made time to enjoy Mott’s reading of a satirical piece, written by Martha Coffin Wright, which humorously spotlighted their society’s unreasonable treatment of women, poking fun at the common notion that women needed constant supervision.

Later in the evening, Mott put women’s rights in social and moral context for the convention’s attendees and the general public, linking their newly organized movement to the well-established temperance and abolition efforts. A local newspaper, The National Reformer, called it “one of the most eloquent, logical, and philosophical discourses we ever listened to. 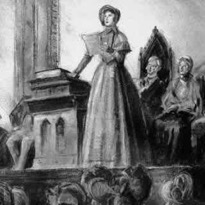 Depiction of Elizabeth Cady Stanton reading the Declaration of Sentiments at the Seneca Falls Convention. Photo courtesy of Library of Congress.

The success of the Seneca Falls Convention demonstrated a powerful truth: Women are capable of taking action. There was no need for them to sit in the shadows and allow things they knew were wrong to happen. They could organize as a group, draw strength from one another, speak up, and effect positive change.

Like the women at the Seneca Falls Convention 170 years ago, Utah women also achieved incredible results by working together to win the right to vote twice–decades before most American women gained suffrage. By courageously mobilizing thousands of women to petition and campaign for women’s suffrage, they secured a powerful right for women both in the state and throughout the country.

For more on the story of Utah women’s involvement in the suffrage campaign, visit our website at https://www.utahwomenshistory.org/.