Over the airfield, a wounded aviator fell from the sky. He lay there for what felt like hours, waiting to die, but suddenly, he felt hands lifting him onto a stretcher and gently setting him in the back of an ambulance. Bodies crowded around him. The aviator kept his eyes closed as the truck lurched forward. He hardly dared hope he’d survive the journey to the nearest hospital.

Maud Fitch, a 35-year-old native of Eureka, Utah, and World War I ambulance driver, wrote about her harrowing drive with the aviator in the October 7, 1918, edition of The Salt Lake Tribune:

“An aviator…fell about a half a mile over [the airfield] and I had to go after him and take him back, cross-country over a terrible stretch…At one point in a potato patch, I [got] stuck as too many doctors had got in [the ambulance] with him. With a wild prayer, I was out of the hole in only a second, and then I had to make a horrible race for the hospital, four kilometers away, and over such a road! If I jarred him, he would die. If I didn’t make it in time, he would die. I shall dream of that four kilometers all the rest of my life. But I got the poor thing there alive.”

As dramatic as this experience was, it was by no means atypical of Fitch’s daily work with Hackett Lowther, a private, all-female British ambulance corps, during World War I. Fitch often transported truckloads of wounded soldiers and airmen more than forty kilometers (roughly twenty-four miles) through the “pitch black” on roads “packed tight with sometimes three streams of advancing troops, calvary, and camions” to find field hospitals willing to treat the men. Because the speed of her travel often determined whether her passengers survived, Fitch would use cigarettes to bribe the Allied sentries to stop traffic for her. 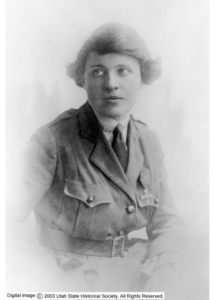 It was in honor of her boldness in performing these life-saving missions that the French government awarded Fitch the French Cross, and an accompanying star, towards the end of the war.

Though Fitch was one of few Utah women honored in this way, many others served just as bravely, such as Lucille Francey, who received the Serbian Cross of Mercy for her work in the Balkans.

Mae Morton, Utah’s first woman to serve near the front lines, was another exemplary figure. She “never flinched so long as there was a chance to minister to the needs of the tired and hungry men in the trenches.” Mabel Winnie Bettiylan, one of approximately eighty Utah nurses who served during the war, felt similarly, writing to her mother, “Seeing our men wounded and dying is all I want [to remember].”

By the end of the war, roughly 20 million people had died. About 9.7 million of these were military personnel, 665 of them from Utah. This number included James B. Austin, a captain, who, on the morning of October 8, 1918, was hit by two machine gun bullets while leading his men through the Argonne forest. Unlike the crashed airman Maud Fitch managed to save, no ambulance came for Austin in time to evacuate him. He died later that night.

Halfway across the world, in Salt Lake City, Austin’s mother and stepfather were celebrating the end of the war with family and friends. They had “no intimation that their dear one had even been injured.” When they finally learned of their son’s death, they were devastated. In 1920, Austin’s grieving mother, Anne Payne Howard, visited France. In her passport she recorded her reason: “visit the grave of my son who was killed in Argonne.”

Howard’s visit to her son’s grave proved cathartic. On her return, she accepted an invitation to speak at a meeting of the Service Star Legion, an organization of women whose children had served in the military during World War I. She spoke about the need to memorialize the soldiers who had fought and died in the Great War by sharing the thoughts and impressions she had while visiting European war memorials. She “graphically and tenderly told of her experiences while visiting these sacred spots,” and soon after accepted a place on one of the League’s memorial committees.

Serving first as committee treasurer and later as chairman, Howard used all the benefits of her social standing in Salt Lake City to design and finance a local memorial grove “dedicated to the enduring memory of the Utah boys who made the supreme sacrifice, in camp or field, during the World War.” 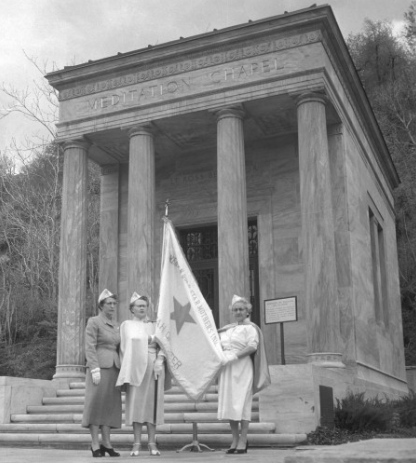 After years of petitioning the state legislature for funds, and carefully drafting and executing memorial plans, Memory Grove was dedicated in 1934 by the Gold Star Mothers, a division of the League whose members had lost their sons during World War I. They would later welcome mothers whose sons lost their lives in World War II, the Korean War, the Vietnam War, and Operation Desert Storm.

Howard’s Service Star Legion chapter was not the only Utah women’s group to dedicate themselves to memorializing the Great War in the 1920s and 1930s. However, her committee’s efforts were representative of the efforts of all Utah women who dedicated themselves to honoring the sacrifices of the brave men and women, from James B. Austin to Maud Fitch, who, in Fitch’s own words, descended into “the very vortex of the greatest conflict in the history of the world” to have their “heart and soul fire tried,” sometimes fatally, on behalf of their country.

Candace Brown recently graduated from Timpview High School in Provo, Utah and is currently studying at Brigham Young University. Raised in Utah, she enjoys learning about and sharing the history of women’s suffrage in the Beehive State.