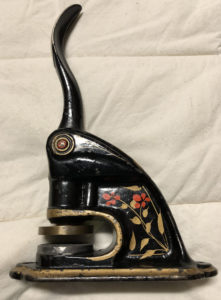 In 1920, many women throughout the United States gained the right to vote with the passage of the 19th Amendment to the Constitution. Prior to this historic legislation, some territories and states granted various levels of suffrage to their female residents; and in 1870, Utah women became the first to vote in an election in the modern United States. But this was only the beginning of Utah’s complicated suffrage struggle, as illustrated by a rather nondescript artifact at the Church History Museum in Salt Lake City, Utah. Though unremarkable in appearance, the object—a metal embossing stamp from the Woman Suffrage Association of Utah—represents the remarkable story of how Utah women won the vote, not once, but twice!

Utah women, many of them members of the Relief Society of The Church of Jesus Christ of Latter-day Saints, enjoyed the vote for several years. But Utah’s position at the forefront of the national suffrage movement was jeopardized with the passage of the Edmunds Act in 1882, which targeted the Latter-day Saint practice of plural marriage. The act disqualified polygamous women and men from voting or holding office. The 1887 Edmunds-Tucker Act took anti-polygamy regulation a step further, disincorporating the Church and confiscating its resources. The new law also disenfranchised all Utah women—regardless of whether they were Latter-day Saints or practiced plural marriage.

Understandably upset at having their right to vote revoked, many Utah women met in Salt Lake City’s Assembly Hall in January 1889 with the purpose of organizing themselves into an auxiliary of the National Woman Suffrage Association. But the issue of polygamy proved divisive among the women. Emmeline B. Wells, a polygamous Latter-day Saint and one of the driving forces behind the creation of the association, wrote of the struggle in her diary on January 8, 1889: “I am besieged on all hands to assist in organizing a woman suffrage association and yet none who have been in polygamy can have any position in it. We have had one meeting last evening and one today and it seems almost impossible to get at it in the right shape.”

Compromises were made, and the Woman Suffrage Association of Utah was officially founded with the object of working for “the enfranchisement of all women without regard to party, sect or creed, and to take such steps from time to time as shall seem to be wise and expedient for the political advancement of woman.” Though the initial executive committee of the association did not contain any polygamous women, the 1890 Manifesto, announcing the abandonment of polygamy, paved the way for anti-polygamist suffragists such as Jennie Froiseth to join with the association and for women like Emmeline B. Wells to later hold leadership positions within the organization. 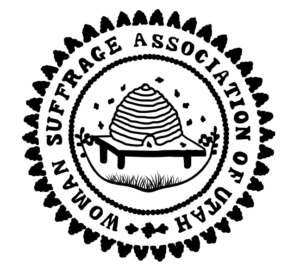 For more information on the Woman’s Suffrage Association of Utah’s efforts to secure women’s suffrage in the constitution, check out our sources below, read our previous post “Contention at the Convention” and watch for Better Days’ soon-to-be-released local histories!

Tiffany Bowles is a Senior Educator at the Church History Museum in Salt Lake City. She is currently co-curating an exhibit about the role of the Relief Society in Utah suffrage that will open at the Museum in November 2019.