Susan B. Anthony first visited Utah in 1871, one year after Utah’s female citizens gained the right to vote, and she returned in 1895 to celebrate Utah women’s successful efforts in gaining suffrage for the second time. Congressional legislation had revoked Utah women’s voting rights in 1887, but in May of 1895, Utah suffragists had secured an equal suffrage clause in Utah’s proposed state constitution. It wasn’t a completely done deal–the proposed constitution had to be approved by Utah’s (male) voters, ratified by Congress, and made law by the President–but Utah women were confident it would happen. For now, they gathered at a suffrage convention in Salt Lake City with others from across the intermountain west to hear national suffrage leaders, celebrate their achievements, and plan campaigns for suffrage in Idaho and Montana.

This photo shows Susan B. Anthony and Dr. Anna Howard Shaw with many of the leading suffragists who attended the 1895 convention. Between lectures, luncheons, receptions, sightseeing, and planning, they wanted to memorialize the important occasion. Each of their faces tells the story of the sacrifice and perseverance necessary to make social change happen. 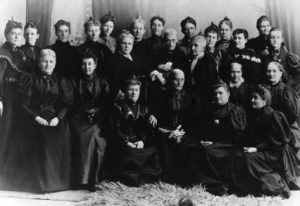 Susan B. Anthony, sitting in the center of the photo, had devoted her life to the cause of women’s suffrage since 1850. Her commitment to the principle of women’s equality was so unwavering that she had defended Utah women’s voting rights even when most suffrage organizations refused to stand with polygamous Mormon women. Dr. Anna Howard Shaw, standing with her arm on Anthony’s chair, was a medical doctor and ordained Methodist minister. She would lead the National American Woman Suffrage Association from 1904 to 1915, and passed away just a few months before the 19th Amendment was ratified by Congress.

You may recognize some of the Utah women in this picture: Sarah M. Kimball stands directly behind Anthony, with Emmeline B. Wells next to her on the right, Dr. Martha Hughes Cannon stands at the photo’s far left, Emily S. Richards stands fourth from left, and Emma McVicker stands just behind and to the right of Dr. Shaw. Colorado suffragists are there too–Ellis Meredith Stansbury stands behind Emily Richards and Mary C. C. Bradford stands on the far right. There are members of the Church of Jesus Christ of Latter-day Saints and so-called “Gentiles,” older women and younger women, and women who would run against each other for political office. Despite their differences, each of them dreamed and worked to bring about better days for the generations of women to come.

Of course, many women who aren’t in this photo also deserve recognition, from Jennie A. Froiseth, to the thousands of Utah women who signed petitions for equal suffrage, to the Native American women, immigrants of Asian descent, and many women of color whose struggle for voting rights extended past 1896 and 1920. Better Days 2020 is working to share more of their stories in the coming year. Thank you for joining with us to honor and celebrate these untold histories!

For more information on the history of Utah women’s voting rights, read this summary and check out our FAQs.