While 19 Utah counties eventually had suffrage associations, few records remain to give us details about these organizations. However, the Farmington’s Woman Suffrage Association (FWSA) minutes have survived, and they give us a glimpse into the tremendous influence this group had on the suffrage movement in Utah and nationally.

Founded on April 13, 1892 with 22 members during a combined LDS Relief Society and Young Ladies MIA meeting, the FWSA’s membership soon grew to 49. The FWSA was a well-organized group with meetings held twice a month through 1895. So, who were these women and how did they feel about the controversial cause of woman suffrage?

Historian Lisa Bryner Bohman observes that “generally, the women who participated were members of a political and religious elite who were involved in many other groups and causes in addition to woman suffrage. The private motivations of most of these women are unclear. Some may have participated to further their husbands’ or their own social interests. Others surely must have been dedicated to achieving the right to vote for all women in the territory. Despite their motivations, the women involved formed a small network connected by family, social, and religious ties.”

The FWSA members used their meetings as an opportunity to prepare themselves for the time when they would be allowed to vote. “They accomplished this through lectures on civil government and current topics of the day, such as the silver and tariff controversies. In addition, the suffrage movement improved the national reputation of Mormon women, which had been severely damaged by the practice of polygamy. Through work in the suffrage movement, women discovered common bonds of sisterhood between themselves and women throughout the nation and the world… The associations helped women become more politically aware and better prepared to take on a portion of the new mantle of political participation.”

The minutes of the FWSA help us understand that while women’s suffrage was the Association’s primary goal, it was not its only aim. The Association intended to train, educate and prepare women to play a more public and significant role in society. In speaking at one of their meetings, Francis Lyman said that women could “use the suffrage movement to become more educated about politics, to use this knowledge to improve their family lives, and to transmit womanly virtues into the realm of government.” Yet the task of civic preparation wasn’t so simple. These new expectations also came with questions for some women, who faced questions about themselves and how they were to enter a new sphere of politics while balancing their traditional roles. The women discussed such dilemmas as “When did political interests interfere with family interests? If a woman were to extend her virtue into the vice of the political world, then would she not risk becoming contaminated herself? How were women to preserve their ‘natural virtue’? The incongruence continued. Home and religion, not politics, were clearly of ultimate importance, but suffrage was a political question… The members in Farmington were reminded that they were not to become so involved in politics that it interfered with their religious duties and beliefs..”

Apparently, the expectation was that women would have to learn to juggle ever more responsibilities. Emmeline B. Wells told the women: “I never wish family duties neglected.” She further suggested that women “exert themselves in areas that were traditional strongholds of womanly influence, such as at social gatherings and school meetings.” Farmington women constantly expressed the belief that the right to vote would make every woman a better mother, since a child’s education would be enhanced by a mother who participated in politics. 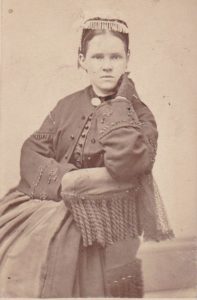 Lucy Rice Clark, first president of the FWSA, said in a 1896 meeting, “Like the light of the sun which is reflected on the tops of the Rocky Mountains is the beacon light shining from the bright stars of the west, and over the tops of these mountains is another star rising and the sun in all its splendor will shine o’er the Rockies restoring lost freedom to Utah… We must trust the ships that are sailing toward the light will not be wrecked upon the shoals but will come safely into the harbor of equal suffrage.”

You can read more about Lucy Clark and other leading women in Davis County here.

Sherri Enfeldt is an online college instructor and community volunteer who has researched Davis County’s suffrage history for Better Days 2020. She especially enjoys art and spending time with her granddaughters.