Becky Petersen’s seventh graders at Hillside Middle School in Salt Lake City were upset to learn that there was a time in our U.S. history when women were not allowed to vote. It didn’t make any sense to them. Why weren’t women allowed to vote? 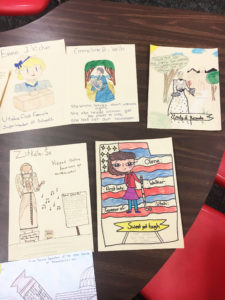 “We started with the voting simulation in the ‘Planning a Memorial’  lesson that has students imagine that only those who are older than them can vote for what to eat for dinner. They didn’t like being left out especially when they were the ones who had to live by the decision,” said Petersen, a Utah Studies teacher. “When I taught them that not being able to vote also happened to women, they were hooked. They not only wanted to learn how women got the vote, but they wanted to use the same strategies used by the suffragists to get their rights to vote for dinner.”

Students responded with comments and questions such as, “We were the first state where women voted? That is so cool” and “We were 50 years ahead of the nation?” or “Oh, I didn’t know Utah was so progressive back then” and “We voted before the women in New York? Yeah!”

The students then used the Utah Women’s Advocate Trading Cards so they could become familiar with many of the people involved in the suffrage movement and in other causes. Petersen laminated two sets of these cards and students played memory by matching alike cards. Students discussed how they use these cards and the Utah Women Making History website to consider how to respect and include others at their lunch table, in the hallways, and on the bus.

When students learned and saw pictures about disability activist, Barbara Toomer’s bus strike and the lack of accessibility for wheelchairs, they were shocked and disgusted.  There were a lot of “that is just wrong” comments. 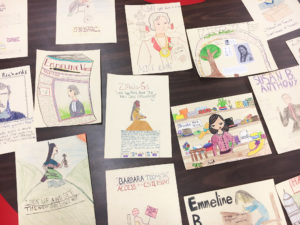 They loved that Dr. Martha Hughes Cannon, the first female state senator in the United States, beat her husband in the election, and they were very much in favor of a statue of Cannon heading to National Statuary Hall in Washington D.C.

They also loved that Seraph Young was the first woman to vote in Utah and the nation with unrestricted suffrage rights, and they wondered, “Why doesn’t she have a national monument in Washington D.C.?” 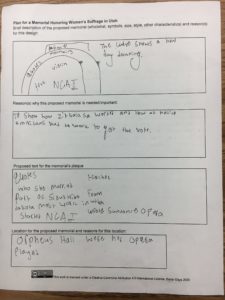 After learning about these historic individuals, students created their own memorials for a key player of their choice. They enjoyed sharing their memorial pictures with their classmates and teaching their peers about their chosen women’s advocates.

“I loved their energy for this unit,” explained Petersen. “Some of the students would walk in and ask, ‘Do we get to work on our projects today?’ Some were still on the computers when the dismissal bell rang and said, ‘But I’m not done. I’m still reading, or drawing, etc.’”

Students provided many reasons for why they selected a certain women’s advocate to study in more depth:

“I want to be an editor like Emmeline B. Wells.”

“Becky Lockhart was alive in my lifetime. I can be Speaker of the House.”

Drawing parallels between Utah women’s suffrage and advocacy in the past to today sparked a civic mindedness in students’ discussions. Petersen appreciated the students’ levels of engagement and how they personalized the messages in this lesson. 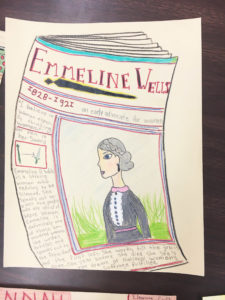 One student said, “I need to vote to show respect for what these women did.”

Another student observed, “So in order for me to be a part of the process I need to vote.”

Are you a teacher who has used the Better Days 2020 curriculum with your students? We’d love to hear from you. Contact us at [email protected]

Naomi Watkins is the Director of Education for Better Days 2020.