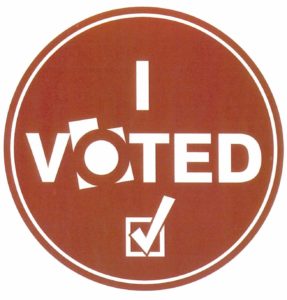 It’s now been over a decade since my first grade year. Since then, I’ve forgotten most of the details about my teacher, my classmates, and our little classroom at the end of the school’s longest hallway. I believe we were learning to read that year, so I’m fairly certain the walls were carpeted with monosyllabic words and the counters spattered with Easy Reader books, but I can’t be sure. Curiously, I do have one vivid memory from that year, but not of my teacher, peers, or classroom. I remember one day in early November, when the teacher in the classroom next door to us spent the entire day wearing a sticker on her shirt. It took me until lunchtime to decipher and a few years to fully contextualize, but the sticker read, in all caps: I VOTED.

A year and a half ago, twelve years since seeing that first grade teacher wearing her sticker and going home to ask my mom what “vote” meant, I filled out my first ballot. While doing so, I felt a bizarre mixture of pride and embarrassment. On the one hand, there I was, a grown American woman exercising suffrage rights so many of my great-grandmothers had been denied. On the other hand, I had no clue what I was doing. Since then, I have tried my best to learn all that I can about voting, but the facts are often so dry and uninspiring that it takes the civic magic away.

Recently, as I continued my efforts to understand voting, I encountered the story of Seraph Young. She was a teacher at the University of Deseret model school for children, but may be better remembered as the first woman to cast a ballot in the United States, predating my next-door-teacher’s vote by approximately 135 years, and my vote by almost 150 years. Since I first learned about her, Seraph’s story has become the vehicle through which I am finally starting to connect some of voting’s many dots.

Seraph’s historic first vote came just two days after women in Utah Territory were legally enfranchised on February 12, 1870. As a full-time teacher, likely settled into a comfortable daily routine, I imagine Seraph felt a brief moment of panic as she considered how going to vote on such short notice would disrupt her schedule and her day’s work. But I can also imagine her squaring her shoulders, sitting down with her daily planner or appointment book, and deliberately carving out a chunk of time in which to vote. 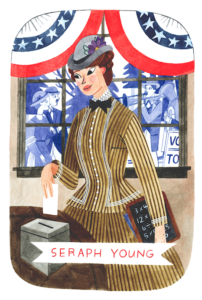 On the morning of February 14, Seraph arrived at the polls early, cast her ballot, and went to teach her young pupils. Just like that, she was the first of Utah, and the United States’, post-Seneca Falls voters. The historic moment received a few nods in the local and national papers, and her life moved quietly on.

Unlike Seraph, I know when I’ll be voting weeks, if not months, in advance. However, the few times I have voted, I have found myself scrambling at the last minute, shuffling my schedule and searching for time to fill out my ballot as the clock runs out. Unfortunately, experience with many of my fellow voters shows that this behavior is not atypical. We have months to prepare to vote–these days we may even have the option of a mail-in ballot–and yet we still neglect to make it a priority .

Seraph’s story reminds me that even on short notice, it is perfectly feasible to fit in some research and finagle my schedule so that I can make time to vote. Like Seraph, I can wake up a bit earlier, get ready a bit faster, and leave home a bit sooner to make time for voting . She didn’t have to devote an entire day to researching candidates, nor did she have to make an excessively long trek to the polls, and neither do I. There is a sacrifice involved in going to vote, but it can be a small one.

When Seraph voted, she became the first woman to vote, not the first to cast a woman’s vote–it’s a meaningful distinction. In America, there is no such thing as a “woman’s vote.” Seraph’s ballot, cast by a young, unmarried, working woman and former refugee, carried the same weight in that local election as the vote of any other person in her district, male or female.

The first time I voted in my local elections, I was still a senior in high school who could barely handle driving on the freeway. Yet my ballot carried the same weight as those of my parents, teachers, and mentors. As Seraph learned while voting, the ballots we cast carry no judgement or reflection of who we are, just a record of the efforts we made as citizens to participate in our government.

But Seraph’s story also illustrates that, in the end, that record is not the most important thing. Seraph’s historic vote received only minor accolades in local and national newspapers and rarely gets a nod in our history classes. Over the next several decades, she occasionally had opportunities to be involved in Utah and national suffrage events, but these were few and far between. 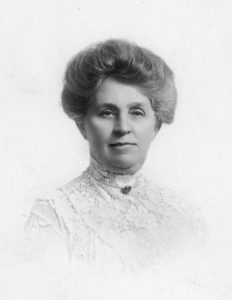 For the most part, Seraph’s life went on as it had before after voting on her way to work on the morning of February 14, 1870. She worked as a teacher. She married a Civil War veteran. She gave birth to three children. In 1902, a Salt Lake newspaper described Seraph, writing, “her unselfish devotion is well known by all her friends.”

The moment Seraph cast her ballot was important, but it was not a moment that profoundly changed her life, or anybody else’s. Those moments, the ones that shaped her life and actually made it meaningful, came not while Seraph was at the polls, but after she had left. They came as she helped a student learn to read, or treated her veteran husband’s old wounds, or cared for her daughters.

To me, Seraph’s story is not only meaningful because it teaches me the necessity of making realistic sacrifices in order to vote, or because it brings home the fact that my ballot carries as much weight as any other voter’s. To me, Seraph’s story is meaningful because it continued. Her story reminds me that if I truly want to make a difference to my family and in my community, then the polls are not where I finish. They are where I start.

Candace Brown recently graduated from Timpview High School in Provo, Utah and is currently studying at Brigham Young University. Raised in Utah, she enjoys learning about and sharing the history of women’s suffrage in the Beehive State.