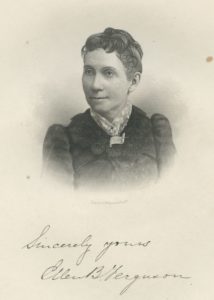 On Feb 18, 1894, a full-house crowd gathered at the Salt Lake Theatre for the closing event of the Sunday night charity series hosted by the Salt Lake Press Club. Part of the program for the evening was devoted to a debate on equal suffrage between two local female doctors: Dr. Ellen B. Ferguson and Dr. Ellen C. Gage.

Opening the debate, Dr. Ferguson cited historical female figures—Abigail Adams and the queens of England—to show the ability and success of women in leadership positions. She also argued that women had just as much right to voice their public opinions as men. “In ages gone by, women have been looked down upon because they had not had brute force sufficient to hold their own.  Now when brains count, they are crowding to the front and displacing men in the highest positions…The right of suffrage should be given to women because she is an individual; because she has a right equally with man to map out her own life…The patriots [of the American Revolution] condemned an aristocracy of blood in England, but established in this country an aristocracy of sex.”

As a counter argument, Dr. Gage–speaking only of married women– argued that “What women want, they will get. They do not want the ballot or they would have had it before this. Women already have all the power they need…They have only to demand in concert and they will get what they want.”  She conceded that “if the majority of unmarried tax-paying women” want the franchise, they should have it. But also stated that married women would be degraded by involvement in politics, saying that it would be like “using the best china for everyday purposes.”

Dr. Ferguson concluded the debate by pointing out that women would not be degraded by politics, if for no other reason that they would not be engaged in politics 365 days a year, there would be plenty of time to take care of all her other duties.

The following year, when the debate over whether or not to include equal suffrage in the state constitution flared up again, Utah women were never universal in their support.  Many like Dr. Ellen Gage continued to speak out against it, while others like Doctor Ellen Ferguson continued to advocate for its inclusion. The legacies of open debate and freedom of opinion are as much a part of the history of suffrage in Utah as any other public issue.  The viewpoints of both of these women show the value and importance of engaging in the political process, wherever you find yourself on the political spectrum.

Tiffany Greene is a historical research volunteer for Better Days 2020. She’s a life-long resident of Salt Lake City who loves learning about and sharing the lives of women past and present.