“I wanted to write a law on our statute books in the interest of art for the masses.” 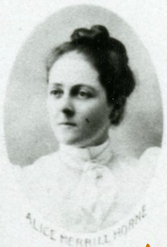 Hailed as Utah’s “First Lady of the Arts,” Alice Merrill Horne exemplifies the impact of women’s political participation in early Utah. As the third woman to serve in the Utah House of Representatives, Alice used her one term in office to advance bills promoting public health, education, and the fine arts. Most notably, she authored the legislation that created the first state- sponsored art agency in the nation. As Utah Governor Heber M. Wells signed the Art Bill into law in 1899, he congratulated Alice and declared the bill “the direct result of equal suffrage.”

Her passion for art propelled Alice into public service. In 1893, Alice represented Utah as the chairman of the Liberal Arts Committee at the Chicago World’s Fair. The next year, her strong disapproval of the public school system’s new art program, and her initial failed efforts to change it, prompted Alice to pursue political action. She convinced a former classmate to run for the Board of Education since women could not run for or hold office in Utah at the time. He agreed only on the condition that Alice do all the campaigning. He won by a large majority and consequently replaced the school art programs with a system directly approved by Alice, providing her first political victory and meaningful evidence of the power of legislative authority. Impressed by Alice’s political acumen, the Utah Democratic Party invited Alice to run for the Third Legislature of the new state in 1898. Alice later recorded, “I accepted this solely in the interest of art. I wanted to write a law on our statute books in the interest of art for the masses.” In fact, before she even declared her candidacy, she drafted her Art Bill which ultimately created the Utah Art Institute and the state’s “Alice Art Collection.” Seizing the opportunity that newly-won suffrage and the ability for women to hold political office offered to her, she was “elected with a thousand votes to spare.” 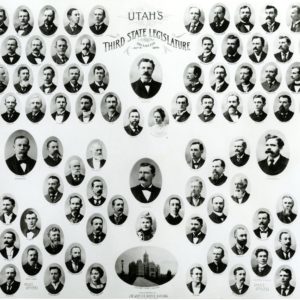 Upon taking the oath of office, Alice coordinated her efforts with Senator Martha Hughes Cannon, the only other woman serving in the Utah legislature that term. Martha and Alice decided to focus their efforts on three specific bills, so Alice approached the Speaker of the House and requested that she be assigned to the Education, Art, and Public Health Committees. When he explained that the Education Committee was already filled, she countered: “Mr. Speaker, I am the only woman in the House. Surely a woman should be on the Education Committee. And besides, I am a teacher.” Not persuaded, he put her on the Rules Committee along with the Art and Public Health Committees. Not to be hindered, she arrived at her first Rules Committee meeting and immediately proposed that the Education and Art committees be merged. The motion passed unanimously, and she was placed on the new Education and Art Committee, thus achieving her original objective. Alice proved to be particularly adept at such political negotiations. Martha’s public health bill and Alice’s art bill ultimately passed both houses of Congress largely due to the relentless efforts and maneuvering of these two women, which included scattering yellow daffodils – a symbol of women’s suffrage – on the desks of each state senator and congressman.

During her term in the House of Representatives from 1899-1900, Alice also introduced the Free Scholarship Bill, which provided four-year college scholarships, and proposed the land grant for the establishment of the University of Utah, for which she was made chairman of the University Land-Site Committee. She devoted much of her time and energy throughout the rest of her life to sponsoring art exhibitions in the community and public schools, advancing the state art collection, and mentoring Utah artists such as Minerva Teichert. Alice Merrill Horne died at the age of 80, having dedicated her life and her political voice to promoting the arts in Utah.

Stay tuned for more about the work of Utah’s early female legislators.