The role Utah women played in the Chicago Columbian World’s Fair Exposition of 1893 is a case study in what’s possible when women join forces for a common cause. Hundreds of women across the geographic, religious, and cultural spectrum in Utah territory joined together to present to the world what Utah women were capable of. Their work at the World’s Fair paved the way for them to regain suffrage in 1896. 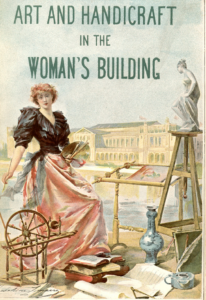 The Columbian Exposition was the first world’s fair to include exhibits featuring women’s talents and skills, and also to involve women in administrative roles. The organization of the “Women’s Work” of the Exposition fell solely under the directorship of the National Board of Lady Managers, and Utah had two women serving on this board. In addition, Utah’s governor appointed a Territorial Board of Lady Managers to oversee Utah’s contributions to the Women’s Building as well as the interior design of the Utah Building at the Exposition. This pattern of female leadership continued down to the county and town levels, where women were appointed to committees to help with the administrative processes of collecting items, raising funds, and generating public awareness and interest.

The scope entrusted to these lady managers was broad enough to include women from all walks of life.  Margaret Salisbury, a Utah member of the National Board of Lady Managers, stated, “The women of Utah are engaged in many branches of industry and we wish to make the best possible showing of their achievements in every line of labor, education, artistic, literary, benevolent, etc. It is important that we show…the conditions of the industrial women, their productions and earnings, whether in the studio, counting house, school room, factory, mill, dairy, or on the farm.”

Under the direction of Emily S. Richards, the Territorial Board of Lady Managers selected noteworthy pieces–made entirely by Utah women–to display at the Exposition. Specific items included: 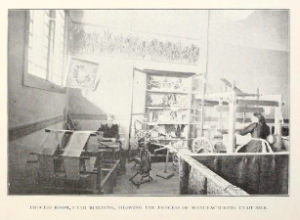 One of the most prominent displays were sets of embroidered silk portieres (curtains), entirely sourced and manufactured in Utah. The finished products displayed at the Exposition were the culmination of the industry of hundreds of Utah women. The process involved women who raised cocoons of silk worms and tended the mulberry trees on which they fed, women who reeled and wove the silk threads, and women who embroidered the portieres…the combined effort is astonishing to consider!

In addition to the physical items that Utah women contributed, many more Utah women gave musical performances and public speeches during the course of the Exposition.  Many Utah women–young and old–were invited to attend and participate in the National Congress of Representative Women, held in May of 1893. During this congress, Utah women delivered addresses on topics such as public health, women’s suffrage, industry, history, and religion. 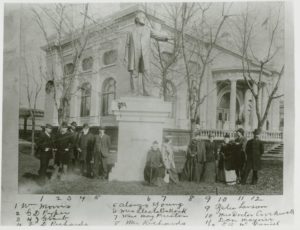 Utah women and men in Chicago for the Fair. Courtesy of the Church History Library.

The impressive entrance of Utah women to the world stage during the 1893 Columbian Exposition is a tribute not only to the administrative work of the women managers, but also to the participation of hundreds of women throughout the territory.  These women seized the opportunity to organize and exhibit the extraordinary capabilities of the women of the territory. Emily S. Richards stated it perfectly: “While this work is divided between the territory, county, and individual, it will all go to make one great whole and will be looked upon by visitors at the World’s Fair as an exhibit by the women of Utah.”  This accomplishment reflected the industry of those Utah women who preceded them, and also foreshadowed the achievements of Utah women yet to come.