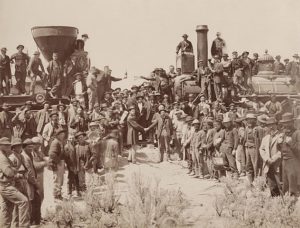 The ceremony for the driving of the golden spike at Promontory Summit, Utah on May 10, 1869; completion of the First Transcontinental Railroad. Courtesy of Yale Collection of Western Americana, Beinecke Rare Book and Manuscript Library, Yale University.

2019 marks the 150th anniversary of the transcontinental railroad. Completed with a ceremonial golden spike driven at Promontory Summit, Utah on May 10, 1869, the railroad brought technological, economic, and cultural changes to Utah Territory. Despite the fact that women do not appear in photographs of railroad workers and businessmen celebrating the project’s completion, they are part of the story, too. Women across the world and in Utah impacted the railroad in many ways and in turn the railroad had unique effects on them, both positive and negative. One of the most surprising effects of the railroad for Utah women who were U.S. citizens was that it directly contributed to their gaining suffrage rights in 1870.

For Utah women, the completion of the transcontinental railroad brought increased attention from federal lawmakers. Now that the western territories were more easily accessible, Congress started having more discussions about polygamy, which the Republican party had termed “one of the twin relics of barbarism” along with slavery. Now that they had ended slavery, political leaders were looking for ways to end polygamy. While these discussions were happening, suffragists began lobbying Congress to grant suffrage to women in U.S. territories, hoping the experiment would go well and spread from there to the rest of the states. Some lawmakers sympathetic to the suffrage cause saw a way to combine both issues, and Indiana Congressman George W. Julian introduced “A Bill to Discourage Polygamy in Utah,” which would simply give Utah women the right to vote. When Congressmen found out that political leaders in Utah Territory liked the idea, they dropped the bill. But discussions continued within Utah. Let’s take a look at what was happening here. 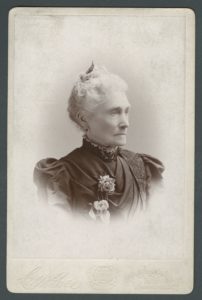 One of the biggest ways the railroad reframed and shifted possibilities for women was through the spread of ideas. The railroad and other technological changes helped to shift and redefine the concepts of men’s and women’s spheres in the late nineteenth century through clothing, transportation (like the bicycle), and more. Women in mid-nineteenth century Utah read widely and they were well aware of issues and debates taking place across the country. Once the railroad connected the country, they could get access to eastern newspapers, pamphlets, and novels much more quickly, and they could spread their own words and ideas as well.

In 1869, Sarah M. Kimball was President of the 15th Ward Relief Society, which had built the first woman-owned building in Salt Lake City to house a cooperative store and meeting space. She sent away for a copy of a newspaper called The Revolution, which was published in New York City by Susan B. Anthony and Elizabeth Cady Stanton. At a suffrage convention in Salt Lake City years later, Kimball recalled: “I would not have dared to say the bold, grand things that Miss Anthony said, it would have made me so unpopular and I hardly dared to shoulder it; but the seed was planted within my soul and I have been laboring for the same cause.” 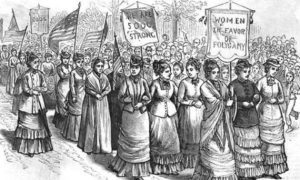 Utah women in favor of polygamy. Courtesy of Getty images.

When discussions reached Utah about enfranchising Utah women, leading Latter-day Saint women found a way to show Utah’s political leaders that they could be entrusted as political partners. As anti-polygamy legislation was being considered in Congress in early 1870, Sarah Kimball led a meeting of Latter-day Saint women in her Relief Society hall on January 6 to protest that legislation. They also passed a motion to “demand the right of franchise,” i.e., the right to vote. This first organized effort to gain the right to vote wasn’t publicly noised about, but almost 5,000 women gathered in Salt Lake City’s “Old Tabernacle” the next week to protest anti-polygamy legislation in a show of political force that was aimed at both national and local audiences. Less than a month later, the Utah territorial legislature unanimously passed a bill extending voting rights to all women citizens 21 years or older. Kimball quickly organized classes to teach women about civic government and the U.S. Constitution. She was certainly putting Anthony and Stanton’s call for “education and agitation” into practice!

Kimball and other Utah women like Emmeline B. Wells worked with Susan B. Anthony and other national suffrage leaders who traveled to Utah by train in 1871. When Utah women’s voting rights were taken away by Congress in 1887, these national leaders worked with Utah suffragists to secure them once again in Utah’s 1896 state constitution. Utah suffragists continued to travel East by train to attend national suffrage conventions and work toward a constitutional amendment for women’s suffrage. The railroad not only helped spark discussions about women’s suffrage in Utah, but it also made it possible by enabling women to organize, opening up new social and civic opportunities for women in Utah and across the nation.

“Gaining, Losing, and Winning Back the Vote: The Story of Utah Women’s Suffrage.”