This Day in History: Women Voted Across Utah for the First Time 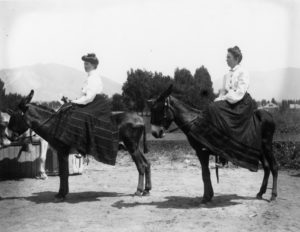 Monday, August 1, 1870: Having already voted in several municipal (city/town) elections across Utah Territory, female citizens participated in a territory-wide election for the first time on August 1, 1870. It was the first time in the post-Seneca Falls era that women voted to elect a delegate to the United States Congress. Taking advantage of their elective franchise from sunrise to sunset, Utah women went to polls throughout the day. Women in Wyoming wouldn’t go to the polls until September of that same year, and it would be at least another 50 years before most women across the country were able to enjoy the right to cast their ballot! 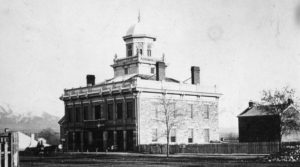 Women in Salt Lake City heard the music of “several bands of music marching about town from morning to evening.”[1] Some women walked to the polling locations, others rode in wagons; many came with their husbands (a few with babes-in-arms), some came by themselves, while others traveled in the company of their fellow female voters. George A. Smith, First Counselor to Brigham Young, wrote that he “had the pleasure of staying at home and taking care of the children while my wives went to the election.”[2]

Polling numbers reported in the newspapers indicate that at least ⅓ of the ballots counted in Salt Lake City were cast by women, with some city precincts reporting that female voters made up nearly half of the total counted. One female citizen cast her ballot by writing in the names of 3 women to hold Salt Lake County offices, even though territory law did not yet allow women to hold public office–Margaret T. Smoot for University Land Commissioner, Eliza R. Snow for Salt Lake County Representative to the Territorial Legislature, and Rebecca M. Jones for Salt Lake County Treasurer. 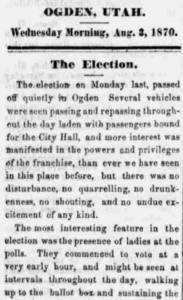 The Ogden Semi Weekly Junction reported on the participation of female voters in the election.

The election was conducted in “good order [and] with an appreciation of the duty that was being performed.”[3] An Ogden newspaper wrote that “if woman suffrage can be wisely, judiciously, beneficially exercised anywhere, it is in the Territory of Utah.”[4] This 1870 election received national attention, with newspapers such as the Chicago Tribune and the New York Herald sharing the news that women in Utah were exercising their right to vote!