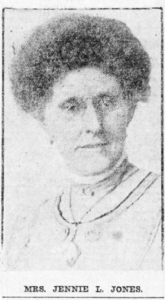 Mrs. William Henry Jones was a slender woman, married, but without any living children. She put on a black dress that day in 1900, fastened its white trim with a plain gold band, and went from her hotel to the Exposition Auditorium in Philadelphia, where she became one of the first two women to serve as alternate delegates for a Republican National Convention. The women in the audience applauded as she took her place on the convention floor.[1]

The newspapers couldn’t get their stories correct, many believing that only one woman was serving as an alternate delegate. One reporter joked that if Mrs. Jones was lonely as the only woman delegate, her husband was undoubtedly also lonely at home in Utah, “enjoying his solitude at the domestic hearth.”[2] Other newspapers reported on the woman they believed to be the only delegate, Susan Henderson West of Lewiston, Idaho. The Chicago Tribune was quick to assure its readers that although she was involved in politics, Mrs. West was “a model housekeeper and mother.”[3]

Until now, the identity of Mrs. W. H. Jones has been a mystery, although she was one of the first three women to serve in an official capacity in a national political convention: she and Susan West served as alternate delegates at the Republican National Convention the same year that Utah resident Elizabeth Cohen served as the first woman delegate to the Democratic National Convention.

Although newspapers never identified her except by her husband’s name, her service at the convention meant that Jennie L. McCargar Jones was an important trailblazer in American politics.

Jennie McCargar was born in 1853 in Canada. She moved to the United States and married civil engineer William Henry Jones in 1872. The couple moved to Utah Territory and had three children, Lionel, Frankie, and Willie. Frankie and Willie died as infants. Lionel lived the longest, but died shortly before his twelfth birthday.

After Lionel’s death, Jones became involved in social organizations, women’s clubs, and politics. She told a Boston newspaper, “I was in Utah politics before Utah became a state. . . The women of Utah took a large share in bringing the territory into statehood honors . . .” She said:

“Women know their own convictions, and are more loyal to them than men, for with women politics is a matter or a part of conscience, and women do not allow themselves to be bribed. We take women in our clubs, whether they are Gentiles or Mormons, and our leaders are Gentiles mostly, but the Mormon women are equally active. Now I am a Methodist of St. Paul’s Church, in my city, but I do not obtrude my creed and belief on others, and I would not, for I have no right to do so.”[4]

Jones served as President of the Woman’s Republican Club and treasurer of the state Republican League, which made her a natural choice for alternate in the Utah delegation to the national convention in 1900. She wrote at least one report of the convention for publication, reproduced in part in the Salt Lake Herald.

“What puzzles me is why men will go wild over one another. I can understand why a man goes into raptures over a woman, but when it comes to cheering and yelling over the appearance of a fellow man or the mention of his name is more than I can comprehend.

When Mr. [Mark] Hanna got up, the whole house rose as one man and cheered and cheered. Then when Mr. [William] McKinley’s name was mentioned they acted as though they wanted to raise the roof. How they must love these men. . . .

Mrs. Senator [Isabel Cameron] Brown tells me it is a disease known as “convention fever,” and that it is the most contagious ever known. I guess she knows, as she has been in politics a long time and may have had it for all I know. . .”[5]

The story of women’s involvement in party politics can be illustrated briefly by a look at the women attending subsequent Republican National Conventions. Four women served as alternate delegates to the 1904 convention, including Susan West of Idaho and Jennie Nelson of Utah. Two women served as alternate delegates in 1908, both from Utah: Lucy Clark of Brigham City and Susa Young Gates of Salt Lake City. In 1912, although Utah and most other states did not send women, the convention saw a historic first: Florence Porter and Isabella Blaney of California served as regular delegates. A publication trumpeted Porter and Blaney as the “first two women delegates to a national convention called to elect a presidential candidate,” but that was an error: the honor had gone twelve years earlier to Utah resident Elizabeth Cohen at the Democratic National Convention. [6]

After serving as an alternate delegate to the 1900 convention in Philadelphia, Jones continued in her political and social activism, including efforts to promote child welfare. During the congressional hearings about whether to seat Latter-day Saint apostle Reed Smoot as a U. S. Senator from Utah, Jones testified in Washington, DC, that she did not see pro-polygamy sentiment from Latter-day Saints in her travels throughout Utah.[7]

Jones spent more and more time serving in the Woman’s Relief Corps, an auxiliary to the Grand Army of the Republic (GAR), an effort dear to her heart due to her brother’s death in a Confederate prison camp.

Jennie and William Jones spent their final years in the pleasant climate of San Diego, California, and when they died in 1931 and 1935, their bodies were sent home to Utah so they could be buried with their three sons in Mount Olivet Cemetery in Salt Lake City.

Amy Tanner Thiriot is an independent historian and author of the forthcoming book,Slaves in Zion: African American Servitude in Utah Territory.

[1] “Mrs. William Henry Jones, the woman delegate from Utah, appeared early and took her place. She was an object of interest to the women spectators, and they applauded her as soon as she appeared in the delegates’ aisle.” “What is Going on at N. J. Headquarters,” Jersey Journal (Jersey City, NJ), June 21, 1900. Some sources list Sara “Sallie” Tanner Taylor (also named “the wife of former Governor Taylor of Kentucky”) as a delegate, but her name is not in the official record of the convention. M. W. Blumenberg, Official Proceedings of the Twelfth Republican National Convention, (Philadelphia, Pennsylvania: Press of Dunlap Printing Company, 1900). Jo Freeman, A Room at a Time: How Women Entered Party Politics, (Lanham, Maryland: Rowman & Littlefield Publishers, 2000).