“Sisters, brave of heart and true, now for simple justice sue, claim the birthright of the free–Equal Rights and Liberty.” 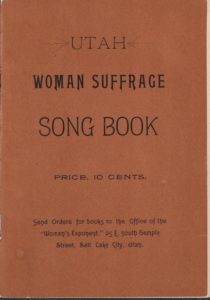 From 1889 to 1895, women across Utah founded local suffrage associations and held meetings in small towns and cities. These meetings featured speeches, recitations, and lessons. During each meeting, suffragists would open and close their meetings with song. Lyrics such as “loosen our sister’s bands, let free our mother’s hands” would echo as the women joined in unity to familiar tunes. These songs were found in the Utah Woman Suffrage Song Book published in March 1891 by the Utah Woman Suffrage Association. The publishers hoped that the songs would “enliven the meetings” of local suffrage groups.

All of the songs were set to familiar tunes, such as Latter-day Saint hymns, so that they were easy to learn and remember. Of the book’s twenty songs, fifteen were written by Utah women. Authors included Lula Greene Richards (first editor of the Woman’s Exponent), Martha Greenhalgh, Emily H. Woodmansee, and Augusta J. Crocheron. As the women met in homes, Relief Society buildings, and courthouses, the powerful lyrics were surely empowering and inspiring to the small bands of women gathered together:

“Woman ‘rise, thy penance o’er, sit thou in the dust no more, seize the scepter, hold the van, equal with thy brother, man.”

As many of the songs were written by Utah women, six of the songs specifically mentioned Utah with lyrics such as: “Come brothers, sisters, join the strain and swell it sweet and strong, we’ll wave the flag of equal rights in Utah,” (“Song for Equal Rights,” by Belle D. Edwards)  and “Will freedom return to the land of the west, and in Utah’s sweet valleys find welcome and rest?” (“Where is the Suffrage Gone, by M.A.Y. Greenhalgh). 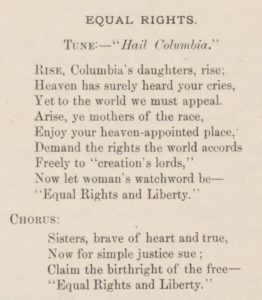 Suffrage songs often contained powerful messages about the injustices that women felt. Augusta J. Crocheron’s “The Reason Why” reflects many women’s frustrations with the status and treatment of women in American society: “Must woman give her fairest years, As wife and mother and then find, Herself a silent figure-head—, No voice ‘[a]mong human kind? May woman toil with hand and brain, Yet in their profits hold no rights—, Shall others gather what she sowed, and conscience blush not at the sight?”

Utah suffragists also supplemented the Utah Woman Suffrage Song Book with other songs such as Latter-Day Saint hymns such as “Oh my Father” and “How Firm a Foundation” or national patriotic songs such as “My Country Tis of Thee”, “Bunker Hill”, and “Hold the Fort”.

The lyrics and production of the Utah Woman Suffrage Song Book illustrate how committed Utah suffragists were to equal rights for women and the passion that they channeled as they came together in unison to work for a common goal. The lyrics throughout the book reflect both the injustices they worked against and the determination many women throughout Utah felt to create change. 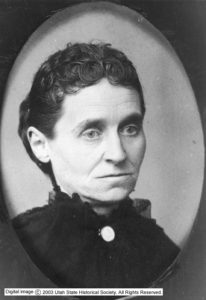 Brandes, Roslyn Leigh Brandes, “”Let Us Sing as we Go”: The Role of Music in the United States Suffrage Movement,” University of Maryland, College Park, 2016.