The 19th Amendment by the Numbers 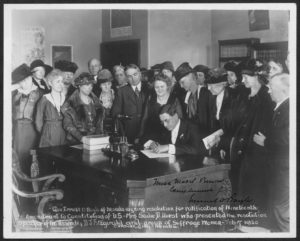 Nevada Governor signs the resolution to ratify the 19th Amendment, 1920. Library of Congress.

This Constitution Day, Better Days presents a look at the numbers on our favorite constitutional amendment (the 19th, of course). Constitution Day commemorates the day in 1787 that the Constitutional Convention delegates in Philadelphia signed the document they had drafted that summer. When that document went into effect as the U.S. Constitution in 1789, it left the matter of voting requirements up to the individual states, but three amendments passed later that prevented states from denying voting rights for various reasons:

Documents, Objects, and Images related to the 19th Amendment from the National Women’s History Museum

Women’s Suffrage in the U.S. by State – Rutgers University