Suffragettes or Suffragists? The Difference Explained

We often hear the terms “suffragist” and “suffragette” thrown around interchangeably when discussing women’s suffrage history. However, the labels held particular differences and at the height of the suffrage movement, the distinction between the two was often a point of contention and debate. Some suffragists might be horrified today to hear themselves referred to as suffragettes while others would gladly embrace the name. Utah women and most American women who supported voting rights called themselves suffragists rather than suffragettes.

The term “suffragette” did not appear until 1906, when the British newspaper, The Daily Mail, used the word “suffragette” in a derogatory manner to distinguish between suffragists who were militant and those who were not.[2]

With the rise of the Woman’s Social and Political Union in England in 1903, led by women like Emmeline Pankhurst and her daughters Christabel, Sylvia, and Adela, there was a dramatic increase in the use of militant action as a tactic to gain the vote. The WSPU’s motto, “Deeds, not Words” exemplified their desire to fight for the vote. They embraced the term “suffragette,” which had been meant to insult them, in order to set their movement apart. 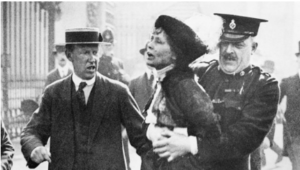 Emmeline Pankhurst being arrested in May 1914. Heritage Images/Getty Images.

Militant action included window-smashing, setting fire to pillar boxes, storming political meetings, putting acid bombs in mailboxes, setting fire to vacant buildings, and heckling the speeches of public officials. They sought only to damage property, never lives. For example, one young English suffragette, Nellie Hall, was in charge of disrupting a dinner that the Prime Minister was attending. She set off the fire alarm and threw a brick through the window of his empty car. She was immediately arrested and as a means of protest, she went on hunger-strike and was force-fed 137 excruciatingly painful times. She vowed in prison that “more militancy would take place and more houses would burn” the longer she remained in prison.[3] 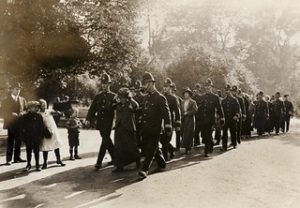 Flora Drummond and other English suffragettes under arrest, 1914. London School of Economics Library.

Not all militant suffrage activism was necessarily violent. It was also manifest in acts of civil disobedience such as hunger strikes, picketing, disrupting meetings, etc. Emmeline Pankhurst boldly stated, “I would rather be a rebel than a slave.” She sought to justify the use of militancy by saying, “If it is right for men to fight for their freedom then it is right for women to fight for their freedom.” Her daughter Christabel expanded on this saying, “If men use explosives and bombs for their own purpose they call it war, and the throwing of a bomb that destroys other people is then described as a glorious and heroic deed. Why should women not make use of the same weapons as men? It is not only war we have declared. We are fighting for a revolution.”

“A suffragist: one who thinks of votes for women. A suffragette: one who gets out and works for it.”[4]

“The suffragette is a mannish woman–the type that seeks notoriety, and incidentally martyrdom, through acts that are entirely unnecessary and certainly undignified.”[5]

“A suffragist is a persuader and a suffragette is a soldier.”[6]

“By their action one may know the subtle difference between a woman suffragist and a suffragette. The suffragist wishes to convince all women that they should vote, while the suffragette principally desires that all men shall recognize the feminine right to the franchise.”[7]

The suffrage movement began in Utah long before the term “suffragette” was heard or claimed by any women. Therefore, when the militant arm of the suffrage movement began gaining increasing influence in the United States, many Utahns were not particularly eager to embrace it. One Utah newspaper claimed that there were “no riotous suffragettes in Utah!”[8] However, several Utah women, Minnie Quay and Lovern Robertson, traveled to Washington D.C to picket outside of the White House alongside National Woman’s Party activists such as Alice Paul and were arrested for their disturbances.

Several articles discussing militancy were featured in Utah magazines like the Woman’s Exponent and the Young Woman’s Journal. However, while the Woman’s Exponent featured it with a sense of disapproval towards militant action, the Young Woman’s Journal took a more curious–though still primarily neutral–look at militancy. This divide could be due to a generational difference in what Utah women saw as appropriate forms of activism.

Regardless of the methods they used to fight for women’s suffrage and whether they thought of themselves as either a suffragist or suffragette, millions of women fought tirelessly to achieve the franchise. As we approach the 100th anniversary of the 19th Amendment’s ratification, we can look back and honor the women who worked in a variety of ways to make it a reality.