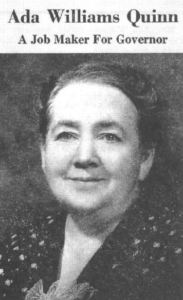 Ada Quinn was a talented inventor and successful businesswoman. She started her own corporation from her home, built several factories, patented a dozen designs, provided jobs to hundreds of women during the Great Depression, sold products around the world, and ran for governor of Utah.

Born Ada Williams on December 13, 1878 in Peterson, Morgan County, Utah, Ada attended the University of Utah and became a teacher. She married fellow teacher Edward Quinn in 1902. When she was 48 and her children were grown, she decided to start a business. 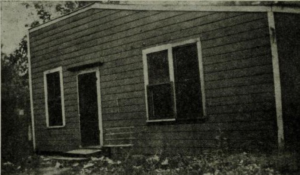 Ada’s business began in her home in 1926, with “five dollars, an idea, one family sewing machine, and her will to work.”[1] She began her business at a time when the idea of purchasing garments ready-made, such as aprons, was gaining popularity. Within 6 months, Ada had sold $5,000 worth of her products with just her old sewing machine. She first sent her son to downtown Ogden to ask if a store would sell her aprons. The store manager bought them and immediately ordered eleven dozen more. She moved her production to a four-room shack that she had built in her backyard.

Soon Ada had a factory built in Ogden next to her home for her company, which she named “The Kathleen Quinn Garment Company” after her daughter. She began hiring dozens of employees, usually widows and single mothers, providing jobs for needy women during the Great Depression when job opportunities were scarce. While many businesses were turning employees away due to the economic state of the nation, Ada was begging people to work for her due to a high demand for her products: “We are rushed beyond capacity. We run extra night shifts to try to keep orders filled.”[2] Soon her company was filling orders from all around the country and the world. She opened up a sales office for the company in New York City, which her daughter Kathleen managed.[3] Soon Ada had almost 200 employees, two factories, an office in New York City, and twelve patented designs.

Ada protected twelve of her designs for her aprons and other products by undergoing the long process of having them patented by the United States Patent office. Soon Ada was having all of her products sold by the JCPenney company, and the Kathleen Quinn Garment Company was the exclusive supplier of aprons for JCPenney. Many other companies tried to push Ada out of the business, to which she responded, “I knew the men who were trying to copy and put me out were only men in a woman’s game, so I knew I had a good fighting chance.”[4]

Ada wanted her children to be as involved as possible in her business. Aside from being the namesake of the company, Katherine Quinn, Ada’s only daughter, helped design dresses and aprons, sell apparel, run the New York office, and train employees. Her sons Horace and Robert helped run deliveries and do janitorial work when they were younger, and later Robert became a partner in the corporation. Ada’s husband, Edward Quinn, was very supportive of her business endeavors and was a sounding board for all of her business ideas.

In 1940, Ada ran for Governor of Utah on the Independent ticket. She said, “Utah needs a governor who will make jobs and knows how to make them.” She argued that, “Countless jobs can be made in Utah if we insist on the right to train our own citizens without dictatorship from Washington. I am running for Governor to call these conditions to the attention of our people and to work for changes in present regulations.”[5] To advertise her campaign, she made and distributed flyers, made radio ads, and more. In total Ada had a little under 600 votes, compared to the approximate 128,000 votes won by Herbert B. Maw, who became governor.

After her campaign for governor, Ada was asked by The Church of Jesus Christ of Latter-day Saints to be on the clothing manufacturing subcommittee of the General Welfare Department of the Church. In this capacity she helped to make nearly a quarter of a million products to donate to the needy.

Ada passed away a few years later in 1945 at the age of 67. She was a brilliant businesswoman, inventor, and believed that if anyone set their mind to something, they could accomplish it. She once said, “Any one with an idea can succeed if she will not be discouraged by obstacles placed in her path or listen to people who say ‘it can’t be done.’ You are not defeated until you acknowledge it.”[6] Ada Quinn blazed the trail for future Utah women in business with her drive and passion.