Utah women were involved in the national suffrage movement for 50 years, from the time they first cast ballots in 1870 until the Nineteenth Amendment became law in 1920. Suffragists in Utah learned from suffrage leaders in the eastern United States, and those leaders also learned a lot from Utah women–the first voting women in the U.S.–that they then applied to suffrage campaigns in other places. Over the next few weeks, we’ll be sharing more about the suffrage organizations Utah women worked with.

When Utah women began to make connections with the suffrage movement in 1870, there were two national suffrage organizations. These rival groups had formed the year before, when women’s rights activists split over deep disagreements about the 15th Amendment and other issues.[1]

The National Woman Suffrage Association (NWSA) formed first. Led by Susan B. Anthony and Elizabeth Cady Stanton, it opposed the 15th Amendment because it did not extend voting rights to women. Anthony, Stanton, and other NWSA leaders worked for a constitutional amendment for women’s suffrage. They also promoted other issues such as women’s right to equal educational opportunities and divorce. The name of their short-lived newspaper, The Revolution, was fitting-–NWSA was willing to take controversial stands for women’s rights and was considered a radical organization.

When Susan B. Anthony and Elizabeth Cady Stanton visited Utah in 1871, Utahn Charlotte Godbe was already on NWSA’s executive committee. As Anthony and Stanton spoke to and met with various groups of women, they began a long and fruitful relationship with Latter-day Saint suffragists. Anthony had originally called for Congress to give suffrage to Utah women so they could use their political power to end polygamy[2]. Still, even though Utah women didn’t vote the way she hoped, she was a strong and vocal supporter of their suffrage rights until her death in 1906. 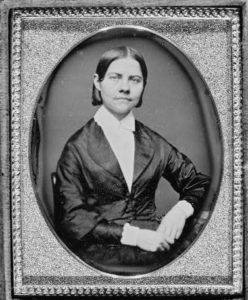 Leaders of the rival American Woman Suffrage Association (AWSA) criticized Anthony and others for working with polygamous women. Led by Lucy Stone, her husband Henry Blackwell, and Julia Ward Howe, AWSA was the larger of the two suffrage organizations. It was also the more moderate, focusing narrowly on voting rights. Unlike NWSA, AWSA supported the 15th Amendment as an important step toward women’s suffrage, and it allowed men to hold leadership positions. The AWSA published a successful newspaper called the Woman’s Journal and focused on state-by-state campaigns for suffrage.

AWSA leaders thought working with polygamous suffragists from Utah would hurt the suffrage cause and damage their respectability. This meant that Utah women had limited connections with AWSA, although some Utah women who were not Latter-day Saints served on its committees.

Utah suffragists forged ties with NWSA by gathering thousands of signatures on its petitions for a constitutional suffrage amendment. Emmeline B. Wells and other Utahns attended almost every NWSA convention beginning in 1879, where they were often honored as women who had already won the right to vote. NWSA lobbied against Congressional legislation that took away Utah women’s right to vote, although leaders were careful to clarify that they didn’t object to other measures Congress used to try to end polygamy.

[1] To learn more about this split in the movement, check out Ta-Nahesi Coates’ Atlantic article “The Great Schism.”

An Advocate for Women: The Public Life of Emmeline B. Wells, by Carol Cornwall Madsen.