This post continues our series on Utah women’s work with national suffrage organizations. Utah women were involved in the national suffrage movement for 50 years, from the time they first cast ballots in 1870 until the Nineteenth Amendment became law in 1920. Suffragists in Utah learned from suffrage leaders in the eastern United States, and those leaders also learned a lot from Utah women–the first voting women in the U.S.–that they applied to suffrage campaigns in other places.

In 1890, the two rival suffrage organizations (NWSA and AWSA) merged to become the National American Woman Suffrage Association (NAWSA), with Elizabeth Cady Stanton as president. AWSA had not worked with polygamous women in Utah, for reasons we described last week, so there was an initial disagreement about whether NAWSA should accept the Utah Woman Suffrage Association (UWSA) as a member. Stanton argued:

“Wherever and whatever any class of women suffer…a voice in their behalf should be heard in our conventions….Mormon women…have been heard in these Washington Conventions & I trust they always will be.”[1]

Stanton  succeeded in getting Utah suffragists included in NAWSA. Later that year, the LDS Church announced the official end of polygamy, which paved the way for better cooperation between NAWSA and Utah women. 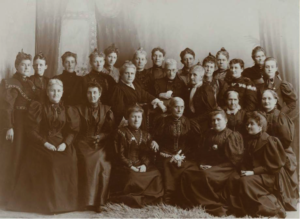 Susan B. Anthony with Utah and Colorado suffragists in Salt Lake City, May 1895. Church History Library.

Susan B. Anthony led NAWSA from 1892 to 1900 and mentored Utah women in their work to regain voting rights. Utahns attended almost every NAWSA convention, and Utah often had one of the largest numbers of delegates. The 1895 NAWSA convention in Atlanta came at a crucial point as Utah suffragists prepared for Utah’s state constitutional convention later that year. In Atlanta, Susan B. Anthony seated Emmeline B. Wells on the stand and invited her to speak about why Utah women’s voting rights should be restored. After Wells’ speech, Anthony endorsed her cause with an eloquent speech that moved many listeners to tears.[2] That April, Utah suffragists succeeded in getting an equal suffrage clause included in Utah’s proposed state constitution.

Anthony led a NAWSA convention in Salt Lake City in May 1895. She congratulated Utah women on their success and planned upcoming suffrage campaigns in other western states like Idaho and Montana.

Utah women regained voting rights when Utah became a state, but they continued to work with NAWSA for a federal suffrage amendment. Carrie Chapman Catt visited Utah in 1899 to reorganize the UWSA into the Utah Council of Women. Led by Emily S. Richards, this organization brought Utah women together across party lines and religious differences. Women in the UCW continued to attend NAWSA conventions, gather petition signatures, and testify to Congress in support of a women’s suffrage amendment. 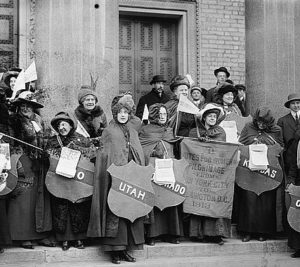 NAWSA staged its biggest event yet–a suffrage parade–in Washington, D.C. ahead of President Woodrow Wilson’s inauguration in 1913. Edna Groshell, a UCW and Utah Women’s Democratic Club leader, marched at the front of Utah’s group in the parade.[3] This event marked the beginning of a new split in the national suffrage movement. While older NAWSA leaders shied away from spectacle, younger suffragists were encouraged by the parade to use new tactics to gain publicity. They would soon split from NAWSA to form a suffrage organization of their own that eventually became the National Woman’s Party.

Utah women continued to work with both NAWSA and the National Woman’s Party to secure a federal amendment for women’s suffrage. Learn more in future posts!