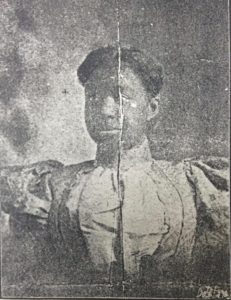 The 150th anniversary of Utah’s first women’s suffrage law is this February. Over the next few weeks, we’ll be posting more on the context behind Utah’s 1870 suffrage law and the effects it had for Utah women.

It’s important to remember this year that although women’s suffrage laws meant that women couldn’t be categorically excluded from the polls because of their gender, many women were still prevented from voting because of their race. Today, here’s a closer look at what the 1870 suffrage law meant for women of color in Utah, specifically for black women.

Utah Territory’s law for women’s suffrage went into effect on February 12, 1870. This law extended the right to vote to “every woman of the age of twenty-one years who has resided in this Territory six months next preceding any general or special election, born or naturalized in the United States, or who is the wife, widow or the daughter of a native-born or naturalized citizen of the United States.”[1] This made Utah the second territory to grant unrestricted women’s suffrage, without property or marital status requirements.[2]

So did this law mean that every Utah woman could vote in elections? The answer is no. Even though the law itself said nothing about race, racially discriminatory U.S. citizenship laws barred certain groups of people from citizenship (and by extension, voting rights).  So the suffrage rights extended to women by Utah’s legislature excluded Native American women and women who had immigrated from Asian countries, because current U.S. law said they could not be citizens.[3]

For the few dozen black women in Utah, the situation was less defined.[4] Unlike Native women and women of Asian descent, black women were considered U.S. citizens in 1870 (thanks to the 14th Amendment).[5] There was nothing in Utah law on paper that categorically excluded black women or men from the polls. But we know that many leaders in the national movement for women’s suffrage were using racist arguments at the time, attempting to advance the voting rights of white women at the expense of women (and men) of color.[6]

It’s very difficult to determine whether black women were actually able to cast ballots in Utah in the 1870s. Because no voting records have survived from this time, it’s impossible to pin down which women voted in Utah elections. Besides Seraph Young, whose historic first ballot was reported in the newspapers, no other Utah women were named as voters in any records or newspapers we’ve searched through from the 1870s and 1880s.[7]

While we don’t have newspaper accounts saying black women were voting in Utah during this time, we also haven’t found any reports saying black women couldn’t vote or were turned away at the polls. There was certainly racism, but without more records, it’s impossible to say whether that racism kept black women from going to the polls and casting ballots.

Without those records, we have to rely on a few indicators to make inferences about who was voting in Utah the 1870s. Wyoming Territory was the only place besides Utah where women could vote at the time, and historian Virginia Scharff has found accounts indicating that black women (as well as men) were voting there.[8] It’s certainly likely that the same could have been the case in Utah.

The first instance shows up in 1895. Utah women wouldn’t regain voting rights until statehood was official in January 1896, but in the summer of 1895, after the constitutional convention had included an equal suffrage clause in the proposed state constitution, many people argued that women should be able to vote in that November’s election.[9]

During this time of uncertainty about whether women could vote in Utah, the “Colored Women’s Republican Club” held a rally. Club president Alice B. Nesbitt chaired the meeting and Elizabeth A. Taylor was the secretary. One of the speakers “emphasized the necessity for registering [to vote], and to beware of statements made by certain registrars that colored ladies, as well as working girls, were not entitled to register.”[10] Although black women had the legal right to register and vote, this indicates that they were facing additional difficulty when attempting to register to vote in 1895. And of course the fact alone that there was a “Colored Women’s Republican Club” in addition to the “Women’s Republican Club” tells us something about the color line.

The election the next year, 1896, was the first after Utah’s state constitution guaranteed equal voting rights for male and female citizens. We see evidence of black men’s and women’s political participation in reports about William W. Taylor’s candidacy for the state senate. William and his wife Elizabeth published the Utah Plain Dealer, a newspaper for the black community, in Salt Lake City. He was nominated to one of five spots on the Republican ticket for the 6th district, a ticket that also included Emmeline B. Wells and Angus Cannon.[11] At a rally before the election, William promised that he would “deliver the solid vote” of the black community to the Republican party, using a number that included female as well as male voters.[12] Black women were clearly active in campaigning that year, as several were among the women reimbursed by the Salt Lake county Republican committee for stenography, door-to-door canvassing, and renting meeting spaces and a “women’s headquarters.”[13]

Articles from another black newspaper, the Broad Ax, indicate that black women and men continued to vote in the coming years and actively participated in party politics. Elizabeth Taylor and Alice Nesbitt campaigned for the Republican party in the November 1898 election, and reports from the Broad Ax show that there were vigorous debates among the black community about which party black voters should support.[14]

The Broad Ax editor Julius F. Taylor often spent the day at the polls for elections so he could help support local Democratic candidates, but none of his reports in the 1890s mention black voters experiencing difficulty at the polls. Of course, this does not mean that black women and men didn’t face discrimination in registering and exercising their voting rights. But if black voters had been turned away from registering or voting in Salt Lake City, we would expect Taylor to have written about it in the Broad Ax. He did print articles about the systematic disenfranchisement of black male voters in southern states through violence, gerrymandering, and laws such as poll taxes.[15]

The Ladies’ Democratic Club held an outing to Lagoon in the summer of 1903, complete with games for children, music, and dancing. At that event, Jane and Isaac Manning, who had emigrated to Utah in 1847,[16] “were presented the prizes for being the oldest Democratic couple at the resort. The trophies were silk umbrellas.”[17] Again, while this does not mean that Jane or Isaac had never faced discrimination in voting or expressing their political opinions, it does indicate that they and other black Utahns were participating in politics in early Utah. They clearly wanted to be part of the process and were pushing the boundaries of exclusion in Utah society.

In summary, there’s a lot we don’t know about what political participation was like for black women in early Utah. Although we can’t find reports that black women cast ballots in the 1870s, 80s, and 90s, we don’t have that kind of information for more than a handful of Utah women.

What we can see from the available historical record hints at black women’s political participation. We don’t find the evidence we would expect to see if black women had been prevented from casting ballots in those years. Instead, the evidence available suggests that at least some black women were voting and active in politics in early Utah, and that they were working to help others participate in the political process. We’re still researching, and would love to hear your suggestions.

Look for more information coming later this year on Utah women’s voting rights in the twentieth century. Many women did not gain voting rights through the 19th Amendment, and we’ll share more about continued pieces of legislation such as the Indian Citizenship Act of 1924 and the Voting Rights Act of 1965, which chipped away at the structural barriers to voting for women of color.

We’ve compiled material in our curriculum here that details the split in the national suffrage movement over the 15th Amendment that enfranchised black men. It points out the racist arguments white suffragists often used to advance their own cause.

We’ve also written here about how discriminatory U.S. citizenship laws prevented many women of color from attaining U.S. citizenship and voting rights, even after 1920. Various pieces of legislation helped to remove some of those barriers, such as the Indian Citizenship Act of 1924 and the Walter-McCarran Act of 1952 that finally allowed immigrants from many Asian countries to apply for citizenship. You can find more about this on our timeline at www.utahwomenshistory.org.

And you can read here about laws Utah had in place that kept Native Americans who lived on reservations from voting until 1957. Utah was one of the last states to lift those restrictions, and only when a lawsuit made its way to the U.S. Supreme Court.

[2] See our post here about the state of New Jersey’s early voting law that allowed women who met a certain property requirement to vote until 1807. Wyoming Territory had passed a similar women’s suffrage law on December 10, 1869.

[3] Women who were married to non-citizens also could not legally be U.S. citizens—even if a woman had been born in the U.S., she lost their citizenship if she married a non-citizen.

[5] However, citizenship did not guarantee voting rights. In 1875, the U.S. Supreme Court ruled in Minor v. Happersett that suffrage was not a right of citizenship, so citizenship alone was not sufficient for women or people of color to gain access to the polls. The ruling was a blow to suffrage leaders, who had been encouraging women to attempt to register and vote in order to force the issue.

[6] See our further reading below for several books and articles that explore this topic.

[7] Two women, Mary Gibbs-Bigelow and Lucy Bigelow Young, were identified as having voted in 1870 fifty years after the fact, in this commemorative postcard from about 1920. These are the only other named women voters we’ve found in newspapers, public records, etc.

[9] The Utah Supreme Court ultimately ruled against this, since the new constitution including women’s suffrage couldn’t go into effect until Congress and the President approved it. But until the Supreme Court weighed in, many women were registering to vote during the summer of 1895.

[11] Dr. Martha Hughes Cannon was among the five Democrats on the opposing ticket who were all elected.

[14] “Echoes of the Election,” Broad Ax, November 12, 1898, 1. Broad Ax editor Junius Taylor dedicated much of his paper to convincing black men and women to support the Democrat party, but he acknowledged that most of the community voted Republican.

Martha S. Jones, “How the Daughters and Granddaughters of Former Slaves Secured Voting Rights for All,” Smithsonian Magazine, March 2019.

Martha S. Jones, “How Black Suffragists Fought for the Right to Vote and a Modicum of Respect,” Humanities 40, no. 2 (Summer 2019).

Paul Reeve, Religion of a Different Color: Race and the Struggle for Mormon Whiteness, 2015.