by Katherine Kitterman and Rebekah Clark

This is a two-part series: click here for part two.

On February 14, 1870, Seraph Young and about 25 other women cast ballots in Salt Lake City’s municipal election. They made history by becoming the first in the United States to vote under a women’s equal suffrage law.

As we approach the 150th anniversary of that historic vote, here’s a look back at why and how Utah women citizens gained voting rights in 1870.

Discussions about voting rights for Utah women began in the late 1860s. The end of the Civil War in 1865 and the arrival of the transcontinental railroad in 1869 eroded Utah Territory’s isolation and accelerated its entry onto the national political stage. Additionally, an influx of new arrivals due to the railroad shifted local political dynamics.

At this time, lawmakers in Congress considered and passed the 15th Amendment to extend voting rights to black men. Women’s rights leaders split over how to respond to the 15th Amendment, and many tried to find a way to get Congress to enfranchise women as well.

They found their opening with the issue of polygamy, which was practiced by 19th-century Mormons in Utah. Congress was turning its attention to eradicating polygamy, having termed it a “Relic of barbarism” along with slavery back in the 1850s.

Suffragists argued that Utah would be a good place to experiment with suffrage, since Utah women could use the power of the vote to end polygamy. In March 1869, Indiana Representative George Julian introduced “A Bill to Discourage Polygamy in Utah,” which simply proposed giving Utah women the right to vote.[1] The bill died in committee but sparked conversations in Utah.

The LDS-owned Deseret News published an editorial stating “The plan of giving our ladies the right of suffrage is, in our opinion, a most excellent one. Utah is giving examples to the world on many points, and if the wish is to try the experiment of giving females the right to vote in the Republic, we know of no place where the experiment can be so safely tried as in this Territory. Our ladies can prove to the world that…women can be enfranchised without running wild or becoming unsexed.”[2]

Wyoming Territory passed a women’s suffrage law in December 1869, and discussions in Utah continued. When new anti-polygamy legislation passed the House of Representatives, many of Utah’s leading Latter-day Saint women inserted themselves into the debate about women’s suffrage and sought a stronger political voice. 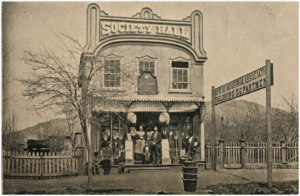 In January 1870, Sarah M. Kimball chaired a large gathering of women at her 15th Ward Relief Society Hall. The women discussed how best to oppose the antipolygamy Cullom Bill under consideration in Congress, and also passed a motion introduced to “demand of the Gov the right of Franchise.”[3] Interestingly, they didn’t include that motion in the meeting minutes published in the Deseret News, along with a call for a larger women’s meeting the next week.[4] Utah women were about to step onto the national political stage, and they had big plans.

The story continues here. Read more about the long history of Utah women’s voting rights here or in our new book, Thinking Women: A Timeline of Suffrage in Utah.