On January 13, 1870, 5,000 women crowded into the “Old Tabernacle” in Salt Lake City for an indignation meeting. These meetings were pretty common throughout the country in the 1800s, providing opportunities for people to gather in protest to unpopular policies or leaders. But this one was unusual, that it was planned and attended by women only (the only men allowed in the building were newspaper reporters). So what was on the docket that night in Salt Lake City that these women found so disagreeable? Surprisingly, it was an anti-polygamy law.[1] 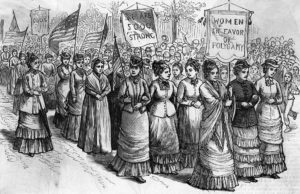 Getty Images. An artist’s imagination from Frank Leslie’s Weekly, May 31, 1879.

The U.S. House of Representatives had recently passed the Cullom Bill, a law which would strip polygamists of the right to vote, sit on a jury, or hold public office. The Mormon women who were protesting that evening didn’t even have any of those rights, but they gathered to object anyway. As they defended the political rights of the men in their community, they were opening the way to gaining their own.

What was said at the indignation meeting made a splash in the national media. Mormon women were collectively stepping onto the national stage for the first time to counter assumptions that women who lived in polygamy were degraded, oppressed, or deluded. Through their speeches, they aimed to show the nation that they were articulate, intelligent, and patriotic–as the The New York Herald later noted: “It will not be denied that the Mormon women have both brains and tongues.”[2] But the women who spoke that cold evening also had another audience in mind. Their speeches and mobilization showed local legislators that these women could be effective and trusted political actors. 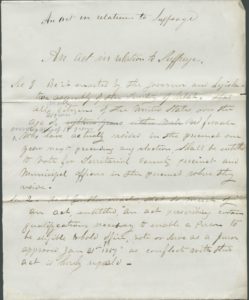 Less than 2 weeks later, the Utah Territorial Legislature, composed entirely of Mormon men, began considering a women’s suffrage bill. On January 24, “A number of ladies, for whom seats had been provided, graced the debate with their presence, and listened with much interest.” [3] We don’t see much other evidence about how the discussion went. The papers of the legislative assembly that have survived show that legislators were more focused on determining whether they could legally enfranchise women citizens than whether they wanted to.[4] Legislators did consider a few things that they didn’t end up enacting: they decided against allowing women to hold public office, and they also decided against lowering the voting age to 18 for both women and men (the voting age at that time was 21).[5]

It doesn’t seem like people made a big deal when the Utah legislature passed the law extending voting rights to women citizens on February 10, becoming just the second place in the U.S. to enact equal voting rights for women citizens (after Wyoming). Nor did they when the Acting Territorial Governor, Stephen A. Mann, signed the bill into law on February 12. But we know some women were watching and listening intently, and they showed up to vote in Salt Lake City’s election just two days later.

To read more about Seraph Young, Utah’s (and the country’s) first woman to vote with equal suffrage, click here. To read about why Utahns were the first women in the U.S. to vote with suffrage rights equal to men’s, click here.