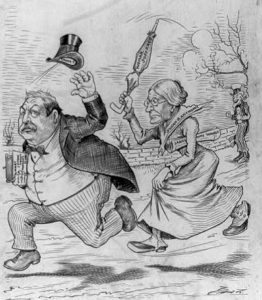 Welcome back to another week of the Better Days 2020 Reading Club! We hope you enjoyed last week’s article on rivalries within the women’ suffrage movement. This week, we’ll be taking a little bit of a different direction.

For the this week’s reading club, we’re jumping back in time and looking at the entire span of women’s suffrage history through pictures. This article by Allison K. Lange shows how the depiction of American suffragists changed throughout the movement. She explains that anti-suffrage images reflected how many Americans perceived female activists. The main tactic used against suffragists was to paint them as women without femininity, who were against life in the home and too hysterical to have a place in politics. 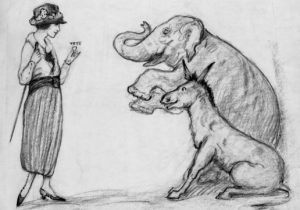 Because of this, suffrage organizations began to depict and photograph themselves and their leaders as loving mothers and competent voters. As the suffrage movement grew more popular, suffragists built nationwide visual campaigns to establish their platform. Women were gaining more and more access to photograph, print, and other images, and it showed. Suffragists showed themselves as fashionable, respectable, and rational, changing the way Americans thought of political women. This visual campaign with political cartoons and other images characterized a large portion of the battle for women’s suffrage in America, including obscuring women of color. What began with an anti-suffrage campaign to depict politically independent women as masculine ended up as with suffragists’ plea to let the white women of the United States vote and participate as they so chose to.

Another way to consider Lange’s article is to consider the images we see and how they affect our view of the world. We see so many more images, cartoons, portraits, and paintings on a daily basis than anyone in the 19th century ever did. Perhaps we can take some time to consider how that affects the way we see others as well as ourselves. Ultimately, this week’s article teaches us that images have a lot of power: those leading the suffrage movement knew it, and so did their opponents!

Many thanks to Emma Summers for developing the materials for the Better Days 2020 Reading Club! Emma is an education student from St. Augustine, Florida. She loves to teach in big lecture halls just as much as she does groups of 2-3 students. Social studies is her passion, as well as chocolate chip cookies and Sunday naps.

Click here for last week’s post about divisions in the suffrage movement. You can find all of our previous Better Days 2020 Reading Club topics and articles here.