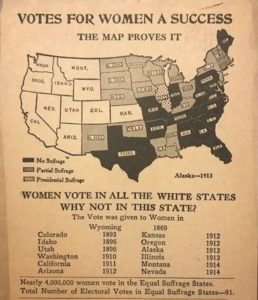 This week’s article was written by Dr. Lisa Tetrault, who we read from our very first week about the Seneca Falls Convention. We’ll be learning about the divisions and tensions that arose within the suffrage movement as it pushed for women’s voting rights. Before the Civil War, suffragists and abolitionists worked together for the most part; pushing for more freedoms for both women and black men. But after the war, the 15th Amendment was about to pass, giving black men the right to vote before white women. Prominent suffragists Susan B. Anthony and Elizabeth Cady Stanton were appalled.

After heated debate, Anthony and Stanton left their alliance with fellow abolitionists and created their own organization: the National Woman Suffrage Association (NWSA). Drawing upon the one thing they approved of in the 15th Amendment, their plan with NWSA was to abandon the plan to achieve women’s suffrage state by state, and go straight through the federal government by creating an amendment for women’s suffrage. This ultimately caused even more division within the suffrage movement, and took much longer than Anthony or Stanton anticipated. Lucy Stone, another suffragist who remained in support of the 15th Amendment, created the American Woman Suffrage Association (AWSA) in opposition to Anthony and Stanton. Stone’s plan was to gain suffrage for women state by state rather than federally. Click here for our past post explaining NWSA and AWSA’s relationships with Utah suffragists.

A rivalry developed between AWSA’s state plan and the NWSA’s call for an amendment to the Constitution. This division continued through the rest of 19th century and into the 1900’s, even after the two organizations merged in 1890. Eventually, the 19th Amendment was ratified in 1920. But what was the the story and legacy that suffragists left behind? Surely, not a unified one. And the legacy of the Amendments themselves? They outlawed certain types of discrimination in voting laws but did not technically create or extend “the right to vote.” Neither Amendment was ultimately strong enough to prevent voter discrimination from taking place.

Thank you for reading along with us this week! Don’t forget to follow the link to Tetrault’s article here, and to download our printable PDF here. We’ll see you next week!

Click here for last week’s post about the bicycle and women’s rights. You can find all of our previous reading club posts here.

Many thanks to Emma Summers for developing the materials for the Better Days Reading Club! Emma is an education student from St. Augustine, Florida. She loves to teach in big lecture halls just as much as she does groups of 2-3 students. Social studies is her passion, as well as chocolate chip cookies and Sunday naps.

Winning the Vote: A Divided Movement brought about the Nineteenth Amendment: https://www.neh.gov/article/winning-vote-divided-movement-brought-about-nineteenth-amendment