Utah Women Who Kept Us Connected 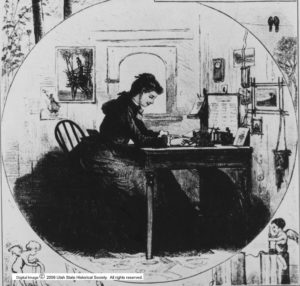 We live in an era when communication happens instantaneously; we can send a text across zip codes and state lines and get a response within a few seconds. Our now-frequent virtual meetings allow us to not only talk with co-workers, friends, and family across vast distances, but to actually see their faces in real time as well. Over the last 150 years, women in Utah have communicated with each other in many different ways: via hand-written letters, telegraph messages, or telephone calls. Many women have played important roles in helping us maintain connection with each other across the distances that separate us. Here’s a small sample:

From 1867-1900, the Deseret Telegraph line was constructed and operated by the Church of Jesus Christ of Latter-day Saints. The county offices that ran these lines were often run by young women who first attended telegraphy school in Salt Lake City and were then assigned as an official “Telegraph Operatress” somewhere in the territory. By December of 1867, the Deseret News reported that “eleven of the offices of the Deseret Telegraph Line [were] supplied with female operators…and before long..nearly every office on the Line will be furnished with female operators.”[1] Estelle Parks, from Nephi, was one such operator for Sanpete County in 1868.[2] Later on, the telegraph brought other women opportunities. Katherine Fenton Nutter, “Utah’s Cattle Queen,” initially came west to manage a telegraph office. 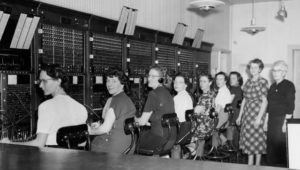 As the telephone began replacing the telegraph as the preferred method of communication across the state, women were front and center again in helping the social and business networks stay connected.  From 1910-1920, the overwhelming majority of telephone operators in Utah were women.[3] Essie Neal ran the telephone office for the Uintah Basin out of her home in Vernal until 1962, when rotary-dial phones that didn’t require an operator were first introduced into the area.[4] 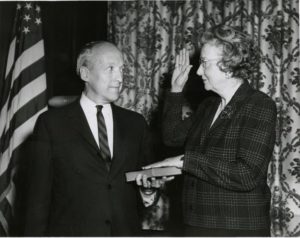 Ensuring the delivery of the mail was another way that some Utah women helped Utahns stay connected. From serving their local rural communities to fulfilling national leadership roles, Utah women have worked in many different capacities for the United States Postal Service. At the turn of the 20th century, Esther W. Francis of Morgan County helped to translate mail for residents since she was fluent in 4 languages. Minnie Crouse Rasmussen of Daggett County, worked as the Postmaster of the Linwood, Utah post office from 1917-1952. In the 1960’s, Reva Beck Bosone, the first female congresswoman from Utah, “joined the Post Office Department as its first woman Judicial Officer. Bosone was the highest-ranking woman postal official until she retired in 1968.”[5]

As we’ve all tried to adjust to a new era of social distancing, interacting with our social and business communities feels more important now than ever. Utah women have always played vital roles in keeping people connected; let’s keep that HERitage going strong!