Welcome back to Reading Club! Up to this point, we have discussed the creative methods women from all walks of life used to gain voting rights, from bicycles to pop culture. Once the Nineteenth Amendment was ratified in 1920, suffragists wanted to enshrine this important step forward in American history — but how? And how to memorialize the battles women fought when prevented from voting? 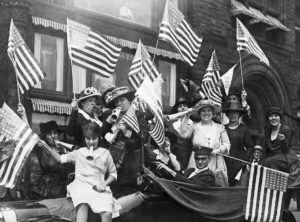 Kimberly A. Hamlin answers those questions in her article “The Forgotten Suffragists.” She shows that both the National American Woman Suffrage Association (NAWSA) and the rival National Women’s Party (NWP) wanted the sole credit for the passage of the Nineteenth Amendment, and their rivalry continued after 1920. Each group worried that the suffrage movement would largely be forgotten in history, and each group wanted to make sure they were the ones remembered. For instance, NAWSA got the Smithsonian to create the first permanent historical exhibit on women’s suffrage, but the NWP commissioned Adelaide Johnson to create a sculpture of Susan B. Anthony, Elizabeth Cady Stanton, and Lucretia Mott that was unveiled in the U.S. Capitol Rotunda. 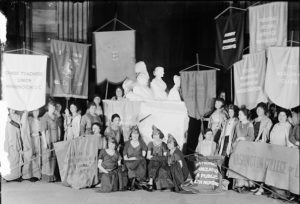 However, neither suffrage organization got the commemoration they hoped for, and neither memorialization was firmly sewed into the fabric of American history. The Smithsonian merely placed relics on the small table where Stanton drafted the Declaration of Sentiments in 1848 and titled the exhibit “An Important Epoch in American History.” And congressional employees moved Johnson’s sculpture to the Capitol’s storage area just one day after its public presentation in 1921. It remained in storage until 1997. Most glaringly, women of color were almost entirely erased, not only by NAWSA and the NWP, but also by the writers of history. 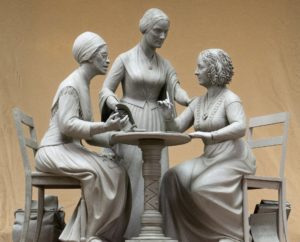 Rendering of a soon-to-be-installed statue in Central Park. AP.

Luckily, historians like Hamlin continue to write women of all backgrounds back into mainstream historical narratives, and new monuments are portraying a fuller picture of the women involved in the fight for voting rights. A new sculpture in New York City’s Central Park will feature Susan B. Anthony, Elizabeth Cady Stanton, and Sojourner Truth–Truth was added to the sculpture after the release of the initial design prompted an outcry over the fact that no women of color were included. Hamlin also lists several national exhibits in Washington, D.C. that commemorate the passage of the Nineteenth Amendment and discusses why it has taken so long to reframe history as an inclusive narrative. She mentions the many historians who have been actively working toward that type of history and urges her audience to check out the art, literature, monuments, exhibits, and other efforts to commemorate women’s suffrage more inclusively in 2020. When all of us come together to recenter American history, that change happens.

While many of us cannot travel to D.C. to visit the exhibits Hamlin mentions, consider looking through the online versions. For example, Shall Not Be Denied: Women Fight for the Vote, is at the Library of Congress until September 2020, and Rightfully Hers: American Women and the Vote is at the National Archives until January 2021.

Do you agree with Hamlin’s interpretation of “the Forgotten Suffragists”? When you check out the article, think about the “Questions to Consider” below and share your thoughts on our social media posts!

Thanks to our intern Maya Brimhall for preparing the materials for this week’s topic. Maya is a current BYU History and Global Women’s Studies student from Mesa, Arizona. She loves socializing, studying women’s history, and eating all types of sweet treats!