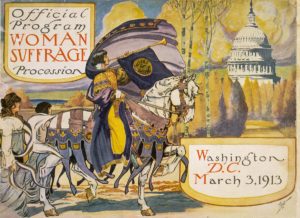 The day before President Woodrow Wilson’s inauguration in 1913, the National American Woman Suffrage Association (NAWSA) held a parade down Washington, DC’s Pennsylvania Avenue in support of a constitutional women’s suffrage amendment. It was the first large, organized, political march on Washington in U.S. history. The parade was organized by Alice Paul, who had studied in England and recently returned full of new ideas to invigorate the slow and aging U.S. suffrage movement. Seven sections of marchers, from different states and professions, made their way down America’s main street accompanied by floats, women on horseback, and actresses enacting symbolic scenes. It was a spectacle. It was also a mess. The parade changed the future of suffrage in America in a single day. 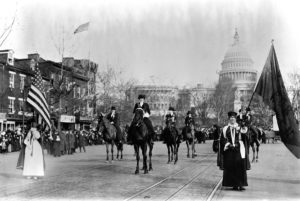 As Rebecca Boggs Roberts writes in this article for the Women’s Suffrage Centennial Commission, Alice Paul paid great attention to the symbolism and details of costumes, props, and floats of the parade. Everything was meant to catch the eye and photograph well, with thousands of women marching and a symbolic pageant on the steps of the U.S. Treasury building. But things hit a snag when the parade was stalled by angry onlookers in town for the next day’s presidential inauguration. The police that had been charged with crowd control did nothing, and in some instances joined the mob in jeering, grabbing, and tripping the women. More than 100 marchers ended up in the hospital. Still, this less-than-perfect ending to the parade gave the suffrage movement more publicity than it had seen in years. 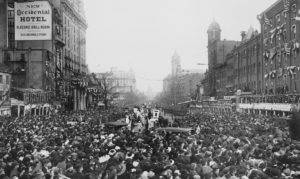 Alice Paul saw the media coverage as an opportunity, but NAWSA leaders didn’t want to go through that kind of ordeal ever again. That difference would cause Paul and others to split off from NAWSA later that year, beginning a tradition of going straight to Congress and the President to fight for their political rights. Utah women would join in, and in fact Utahn Edna Groshell led our contingent in the 1913 parade–we sadly haven’t found a good photo of her. Read Roberts’ article about the 1913 parade and its effects, then check out this Atlantic article to see more fantastic photos of the parade and the crowds. Make sure to comment on our social media–we would love to hear what you think and start a discussion! Download your printable PDF here, and we’ll see you next week.

Did you miss last week’s topic? Click here to check out “How Black Suffragists Fought for the Right to Vote and a Modicum of Respect,” by Dr. Martha S. Jones. You can find all of our Better Days 2020 Reading Club topics and articles here.

Many thanks to BYU education student Emma Summers for developing the Better Days 2020 Reading Club materials!