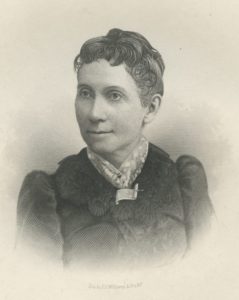 Dr. Ellen Ferguson and Claire Ferguson: A talented speaker and intelligent thinker, Dr. Ellen Ferguson began practicing medicine in Salt Lake in the 1870’s. One newspaper noted: “In…all that relates to the medical profession, Mrs Dr. Ferguson has no superiors and few equals.” [1] Ellen traveled through Utah and the Midwest, lecturing on topics including women’s and children’s health, women’s suffrage, and home industry. When the woman-run Deseret Hospital was established in 1882, she played a crucial role as a member of the executive board as well as the hospital’s first resident surgeon and physician. In addition to her work as a doctor, Ellen was also active in the Utah suffrage movement. She delivered petitions against the the Edmunds-Tucker Act to lawmakers in Washington, DC, served as the president of the Salt Lake County Woman Suffrage Association, and petitoned the constitutional convention requesting equal suffrage in Utah’s state constitution.[2], [3]

Ellen continued her political work after statehood by establishing and presiding over the Women’s Democratic Club of Salt Lake. In 1896, she was elected as an alternate delegate to the National Democratic Convention, where she made national news by being the first woman to occupy a seat at a national political convention for a major party.[4] She was also a founding member of the Utah State Historical Society and the Red Cross Society of Utah. 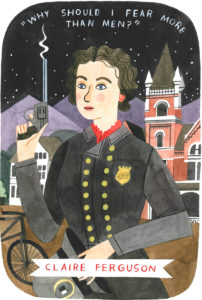 Ellen’s daughter Claire was active in the same organizations as her mother in her teenage years. She performed musical selections for the Woman Suffrage Association and gave stump speeches for the Utah Democratic Party as she helped campaign for presidential hopeful William Jennings Bryan. Claire carved out a name for herself by becoming the first female deputy sheriff in Utah, and most likely one of the first in the nation. She was only 20 years old when appointed, and newspapers across the nation ran articles about the “Girl Sheriff” from Utah. Claire’s duties as deputy sheriff involved transporting women patients to the asylum in Provo, Utah, serving legal papers and jury summons to Salt Lake residents, and handling defendants during trials at the county courthouse. She became skilled with a revolver after training alongside the other (male) members of the sheriff’s department.[5] In 1900, Claire and Ellen moved to New York City, where Claire married and started a family. Claire raised a daughter (Ellen Wright) as a single mother while also taking care of her aging mother Ellen. 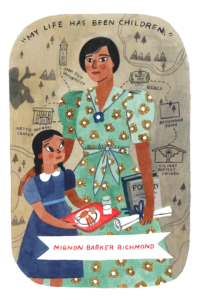 Mignon Barker Richmond and Ophelia Richmond: Mignon Barker married Thomas Richmond in 1933 and raised his daughter, Ophelia. The two were very close. Mignon lived by the African proverb “it takes a village to raise a child,” so she not only raised her step-daughter but also played an active role in the lives of children in her community. She started the school lunch program for the Stewart School at the University of Utah in 1948, and later developed home living classes at the Utah State Industrial School, a youth correctional facility. Mignon also co-founded the Nettie Gregory Center to provide a gathering place for recreational activities for kids of color. “My life has been children,” she noted when receiving an award at age 80 for her achievements in education and volunteer work as a tutor.[6] 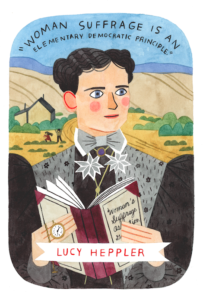 Lucy Heppler and Amelia Heppler Hansen: Louisiana “Lucy” Heppler worked hard to establish women’s voting rights in her small town of Glenwood, just a few miles outside of Richfield, Utah. In the 1890’s, Lucy served as vice-president of the Sevier County Suffrage Association and president of the Glenwood Suffrage Association.[7] She continued to advocate for national suffrage laws even after women citizens in Utah secured the right to vote through the Utah constitution. Lucy raised 18 children, 7 of whom were adopted. She also served as a leader in her church organization for young children for over 25 years. Lucy’s daughter, Amelia, continued her mother’s legacy of leadership. When the National Woman’s Party was establishing branches in Utah in 1916, Amelia was chosen to lead the organization in Sevier County.

Read our previous post about other mother/daughter duos in Utah’s suffrage history here.