Today we honor the mothers and other women in our lives whose hard work, example, and support help us grow to our full potential. Here are a few mother/daughter duos in Utah suffrage history: 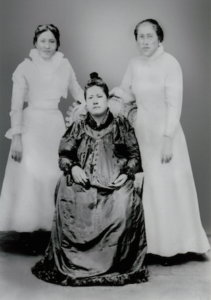 Makanoe Kahluhilaau Kaaepa and her daughters. Hannah is on the right. Courtesy of Noe Poulsen.

Hannah Kaaepa and Makanoe Kahluhilaau Kaaepa: Twenty-five-year-old Hannah Kaaepa immigrated from Hawaii to Utah in 1898 with her mother, Makanoe Kahluhilaau Kaaepa, to join fellow members of the Church of Jesus Christ of Latter-day Saints. That same year, the United States annexed Hawaii. Makanoe had been close to Hawaiian Queen Lili’uokalani, who was dethroned after attempting to grant a new constitution reinstating the monarchy’s authority and restoring voting rights to native Hawaiians. Makanoe and her daughter were loyal to the crown, and that loyalty reinforced their support for women’s suffrage.

Hannah and Makanoe settled with family members living in Iosepa, Utah, a colony of native Hawaiian Mormons located in Tooele County. Makanoe had held leadership positions in the women’s Relief Society organization in Hawaii, as well as the Woman’s Hawaiian Patriotic League. Hannah quickly took on leadership positions in church organizations in Utah and served as the secretary of the Iosepa Sunday School. In February 1899, Kaaepa accompanied prominent Utah suffragists to Washington, D.C. for the third Triennial Congress of the National Council of Women. There, Hannah spoke at one of the sessions urging Council members to use their influence to support Queen Liliuokalani’s efforts to secure suffrage for the women of Hawaii. She ended with an expression of love in her native language and presented flower leis to Sewall, Susan B. Anthony, and Anna Howard Shaw.[1][2] Queen Lili’uokalani, who attended Hannah’s speech, hosted a dinner in her home for Hannah, her fellow Utah suffragists, and national women’s leaders.[3] Makanoe and Hannah’s efforts reminded these leaders that women in U.S. colonies deserved the same rights as women on the mainland. 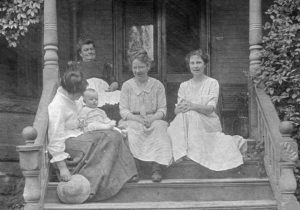 The Allen family in 1910. Corinne is seated on the porch and Florence is in the middle. Kent State University Library.

Corinne and Florence Allen: Corinne Tuckerman grew up in Ohio and was educated at Mt. Holyoke and Smith Colleges. She married Clarence Allen in 1877 and they soon moved to Utah. Corinne had 6 children, 4 daughters and 2 sons.  A convert to the cause of women’s suffrage, Corinne admitted herself she had initially “been conscientiously opposed to woman suffrage.”[4] She remembered walking with one of her daughters, who was 8 years old at the time, up Salt Lake City’s Main Street. Her daughter said, “Mother, I don’t see why women can’t take some part in politics.” [5]  Corrine acknowledged that her daughter was an example to her. Eventually, the idea won her over that the ballot in the hands of women would have an elevating effect upon society. She became active in the Salt Lake suffrage scene in the 1890s as a member of the Woman Suffrage Association in Salt Lake. She often addressed audiences on the benefits of women voting. Corinne also served on the World’s Fair board of directors for Salt Lake County in 1893, participated in the Utah Congress of Mothers (later known as the PTA), and was active in the Salt Lake chapter of the Daughters of the American Revolution and the Ladies’ Literary Club. In 1904, she traveled to Berlin with her daughter Florence and spoke to the International Council of Women. 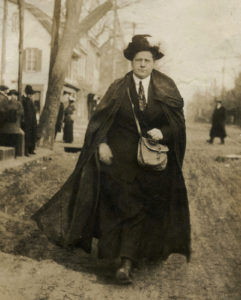 Corinne’s third child and third daughter, Florence, was born in 1884 and was always eager to learn. Florence was an accomplished musician who left Utah for Ohio at the turn of the century and earned undergraduate and masters degrees at the Women’s College of Western Reserve University. She studied music in Berlin for 2 years after attending the International Council of Women there. However, Florence had always felt compelled to pursue a career in law. In 1910 she applied for and was accepted at the University of Chicago Law School. She was the only woman in her class of 100 law students. Florence eventually transferred to the New York University Law School, where she supported herself by giving musical lectures, and also by working for the National College Women’s Equal Suffrage League.

Florence participated in the 1913 suffrage “hike” from New York to Washington D.C. After graduating with her law degree, she moved to Cleveland but was unable to find a firm that would hire her.  So, she started her own law office the next year! Many women in need of legal assistance “took pains to seek her out, and give her the opportunity to do their work.”[6] After the ratification of the 19th Amendment in 1920, Florence’s suffragist friends encouraged her to run for a judgeship in Cuyahoga County.  But since the primary elections had already taken place, the only way for Florence to get on the ballot was to have a petition signed by 2,000 residents. Thanks to the help of her friends, Florence easily garnered the required signatures within two days, and went on to win the election later that fall. After serving on county and state supreme courts in Ohio (the first woman appointed to a state supreme court in the U.S.), Florence was appointed as a judge to the U.S. 6th Circuit Court of Appeals in 1934.  She was the first female judge appointed to a federal appellate court in the United States.