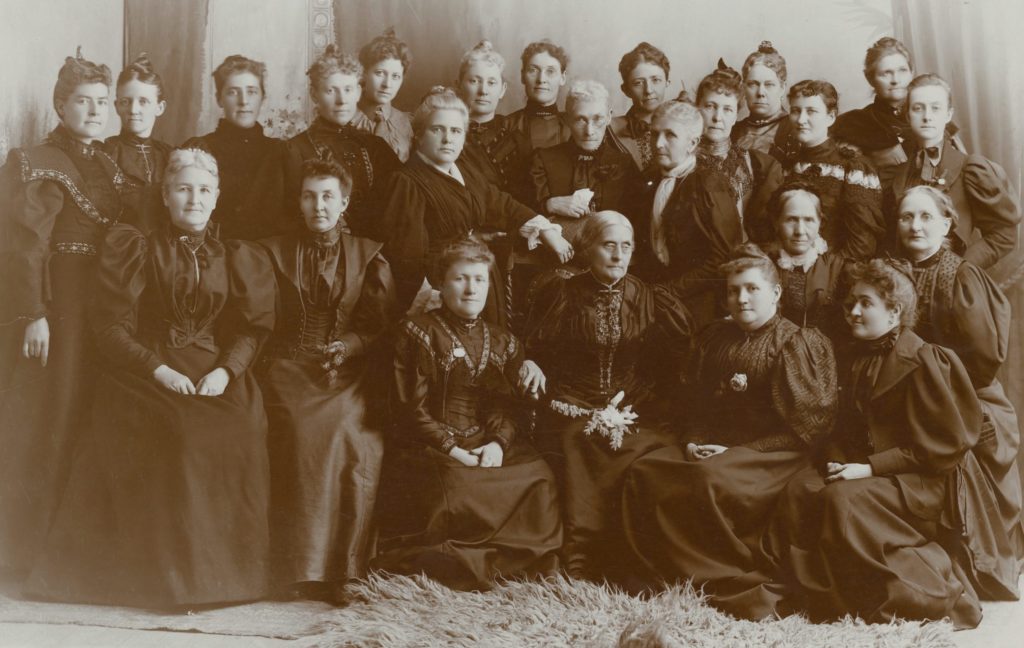 Susan B. Anthony, Anna Howard Shaw, and Utah and Colorado suffragists. LDS Church History Library. See below for a full list of the women pictured.

125 years ago today, the Rocky Mountain suffrage convention opened in Salt Lake City. As women packed into the Salt Lake City and County Building, national suffragists Susan B. Anthony and Rev. Anna Howard Shaw took the stand. Seated next to them were leaders in the movement for women’s voting rights from Colorado, Wyoming, Idaho, and Utah, as well as Utah civic leaders there to welcome them.

Susan B. Anthony had visited Utah once before, in 1871, when she and Elizabeth Cady Stanton met with newly-voting Utah women. Much had changed when Anthony returned in 1895–Salt Lake City had grown, and so had her relationships with Utah suffragists. She had been one of the strongest supporters of Utah women’s voting rights, even when Congress tried to disenfranchise them in order to end the practice of plural marriage.

In 1895, Anthony and Rev. Shaw represented the National American Woman Suffrage Association (NAWSA). Utah suffragists were honored to host a regional NAWSA suffrage convention that would show off their well-organized movement. Suffragists from across the territory spoke to large crowds about their work to regain the vote after being disenfranchised by Congress in 1887. Just a few weeks earlier, that work had  ensured an equal suffrage clause was included in Utah’s proposed state constitution. Everyone was confident that Utah would become the third equal suffrage state–behind Wyoming (1890) and Colorado (1893)–sometime that next winter. And suffragists in other western states and territories wanted to glean what they could from Utah’s experience for their own upcoming campaigns.

As Susan B. Anthony and Rev. Shaw arrived in Salt Lake City on May 12, they were met by dozens of Utah suffragists who joined them for breakfast at the Templeton Hotel and then a tour of Salt Lake City. It was Sunday, and both women spoke in the LDS Tabernacle that afternoon (Rev. Shaw became the first woman to preach there), as well as the Salt Lake Theatre that evening. The Rocky Mountain suffrage convention opened the next morning in Salt Lake’s City and County Building, in the same room where Utah’s constitutional convention had drafted the proposed state constitution. There were still Susan B. Anthony recorded in her diary that Constitution Hall was “crowded to suffocation,” with hundreds of people unable to get into the room, so later meetings were moved to the Assembly Hall on Temple Square that could accommodate a larger crowd.

On Monday and Tuesday, women from Utah and Colorado addressed the convention alongside Susan B. Anthony and Rev. Shaw. This gave them an opportunity to highlight their work for voting rights, to recount their history, explain their organization and tactics, and receive recognition for what they had accomplished. It was a big moment for Utah women, who had so often divided along religious lines in the conflict over polygamy, to come together and celebrate regaining the vote in a moment of hard-won unity. The recognition of national leaders and anticipation that many states would soon follow Utah’s lead in extending voting rights made the convention arguably the highest point in Utah suffrage history.

The convention also included opportunities to socialize. On Monday evening, Emily and Franklin Richards hosted a reception for the distinguished visitors at their home on A Street, with food, flowers, and decorations in yellow, the color of suffrage. On Tuesday, about 150 women traveled by train to SaltAir, a resort on the Great Salt Lake where many of the women bathed in the refreshing, salty water. This provided an opportunity for many local suffrage leaders to meet Susan B. Anthony, who was a hero to them and whose photograph was displayed proudly in many of their meeting halls. It was a week to remember, but the story didn’t end there.

Suffrage work continued after Utah formally became a state on January 4, 1896. Many women of color (including American Indians and immigrants of Asian descent) were ineligible for U. S. citizenship and voting rights, and so they continued to press for access to the ballot. And Utah women also continued to support a push for a federal women’s suffrage amendment. Follow along with us this summer as we share their stories. 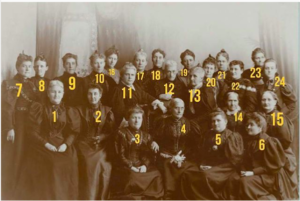 Sometime during the convention, Utah and Colorado suffragists posed for this photograph with the visiting national leaders. Identifications below:

“The National Conference,” Woman’s Exponent, May 15, 1895, p. 4. Speeches from the convention were reprinted in subsequent issues of the Exponent through the rest of the year.