Tomorrow is the 75th anniversary of V-E Day! Here’s a sampling of Utah women’s experiences on the home front during World War Two. 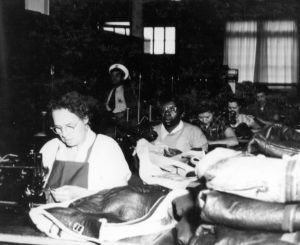 After the United States entered the war in December 1941, millions of men were called up for military service and women went to work to support the war effort as well. By 1944, women made up more than a third of Utah’s workforce, working at military bases or factories. Newspapers praised women’s contributions to the war effort but also often emphasized their femininity and submission to male authority, reflecting social anxieties about what might happen if women took on men’s roles. Many women supported their families with their wages but lost their jobs when men returned home from the war.

Hill Air Force Base was the largest wartime employer in Utah and brought many newcomers to the state–members of the armed forces as well as their family members and others looking for work. Twenty-year-old Anna Belle Weakley came to Ogden from Louisiana in December 1942 to join her fiance, who was stationed at Hill. Anna Belle was black, and it was initially difficult for her to find a place to live due to the influx of new arrivals in Ogden and social segregation. After first working a job unpacking shipments and counting nuts, bolts, and screws, she took typing at Weber State, passed the civil service exam, and began working as a typist. Anna Belle also worked at the cafeteria overseeing the salad crew, as well as working the coat check at the Officers Club on weekends. 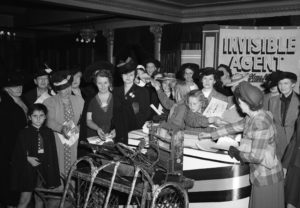 “Minute Women” also contributed to the war effort in Utah by collecting salvage materials that could be recycled for military uses–especially nylon, rubber, silk, and steel. Minute Women served as part of the Volunteer Salvage Corps under the War Production Board, ideally with a woman on every block educating her neighbors about the materials needed and organizing drives to collect them. Minute women in Utah also collected tin cans, paper, and leftover fat and oil from cooking–even setting up locations where hunters could leave fat from deer and elk they killed.

During the war, the U.S. military built new hospitals in the U.S. to care for wounded soldiers who could not go back to the front. One of these was Bushnell General Military Hospital, which opened in Brigham City in August 1942 for U.S. soldiers from the west coast region and Italian and German prisoners of war. Thousands of women volunteered with the Red Cross as nurses, cooks, teachers, and hostesses to assist with veterans’ physical and emotional recoveries. For example, Norma Bailey trained as a nurse at Ogden’s Dee Hospital so she could volunteer at Bushnell. Minute Women also contributed to the hospital by collecting and donating books and other supplies and planting trees. 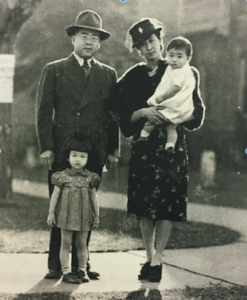 Japanese American women had to battle injustice at home during the war. Under Executive Order 9066, the U.S. government imprisoned Alice Kasai’s husband Henry in an internment camp in Minnesota. About 120,000 Americans of Japanese ancestry were forcibly relocated from the west coast due to fears of Japanese attacks; Henry was relocated because he was a leader in Utah’s Japanese American community. During Henry’s two and a half year imprisonment, Alice led the Japanese American Citizens League from her Salt Lake City home, coordinating help for families in the camps. After the war, Alice and Henry continued to lobby for citizenship and other civil rights for Japanese immigrants. They helped establish the International Peace Garden in Salt Lake City as well as the Sister City Project between Salt Lake City and Matsumoto, Japan that sponsors student exchange programs and other community projects. Alice fought all forms of discrimination, working closely with the NAACP and PTA, and helped to overturn Utah’s ban on interracial marriage.

Utah women faced hardship, sacrifice, fear, and in some cases, bigotry during World War II. Their strength and courage in the face of adversity are a legacy worth celebrating.