150 Years Ago Today: “The Inauguration of the Female Franchise” 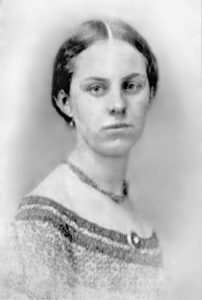 Seraph Young, first woman to vote in February, also voted in this election.

August 1, 1870: Utah Territory. In the peak of the summer season, when crops were nearing harvest and trees were heavy with fresh fruit, women in Utah went to the polls for the second time in six months. The first time, back in February, Utah women voted in municipal elections and became the first in the United States to vote under an equal suffrage law.[1]

Now, in August, thousands of women from Willard to Washington cast their ballots in a territory-wide election to vote for their congressional delegate, a non-voting member of the U.S. House of Representatives. Utah women’s votes were historic and unprecedented. Women citizens in Wyoming had gained the right to vote in 1869, but they wouldn’t vote in their first election until September of that year. Even though it had been over twenty years since the call for women’s right to vote at the Seneca Falls Convention, it would be another fifty years before women in many states would gain equal access to the ballot box!

On this historic election day in Salt Lake City, women such as Fanny Thatcher, Eliza R. Snow, Lucy Decker, and Seraph Young voted at City Hall on the corner of First East St. and First South St. (modern day State Street and Second South). Although they had equal access to the ballot box, women voters were required to use a separate entrance. Walking or riding to the polls, they would have heard music from marching bands on the streets of the city.[2] They might’ve stopped at the nearby Post Office or looked inside the numerous shops that lined East Temple Street (modern day Main Street) such as Dinwoodey’s Furniture Store, T & W’s General Store and ZCMI, where Mrs. Colebrook had a wide selection of parasols and “trimmed hats and bonnets” available for cheap to offer relief from the hot summer sun. If they voted in the evening, women might’ve picked up the latest edition of the Deseret Evening News, whose offices were also on East Temple Street, and perused articles about the latest expeditions of John Wesley Powell or the Franco-Prussian War.[3] 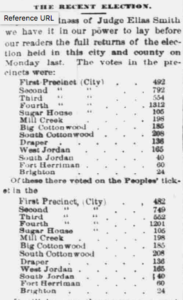 There were 4 polling locations in Salt Lake City, with additional polls in Sugarhouse, Millcreek, Bingham, Draper, Brighton, Big Cottonwood, South Cottonwood, and West Jordan.[4] Polling locations in Cache, Box Elder, Weber, Davis, Utah, Sanpete, Summit, Juab, Millard, Beaver, and Washington counties were also open for this territory-wide election. While voting records from the time do not exist, we can assume that female citizens in those places also exercised their right to vote.[5]

In terms of voter participation: the 1870 census records indicate that several hundred people of color were residing in Utah Territory, including about 200 women.[6] It’s unclear whether these women were U.S. citizens or eligible to apply for citizenship. Nor is it clear whether they were able to cast their ballots in the 1870 general election, since voter records have not survived from this time period.[7]

Additionally, it’s important to recognize that Utah territorial boundaries overlapped boundaries of existing indigenous nations, where thousands of women lived and experienced their own practices of community engagement that were largely unrecognized by the territorial government.

Note: Not only did 1870 mark the beginning of women voting in Utah, it also marked the first contested general election since the territory had been established in 1850. The creation of the Liberal and People’s parties earlier that year meant that voters were choosing between candidates from opposing parties.

We’ve posted about this historic general election before: check out last year’s article here for another take on the story.

[1] Women citizens in Wyoming, who had gained the right to vote in 1869, would not vote in their first election until September of that year.

[6] COMPENDIUM OF THE 9TH CENSUS

[7] Check out our article on Black women’s political participation in early Utah for more details on what we know (and what we don’t) about who was able to vote in Utah’s earliest elections open to women.