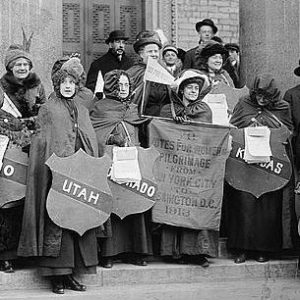 If you’ve been watching the new PBS documentary The Vote, you may have wondered how Utahns fit in with the national suffrage parades and protests of the 1910s. In 1913, Alice Paul organized a grand parade down Washington, D.C.’s Pennsylvania Avenue for the National American Woman Suffrage Association (NAWSA).

It was the first large-scale political march on Washington in U.S. history, timed for maximum press coverage on the day before President Woodrow Wilson’s inauguration. The parade didn’t go as planned, but it marked a turning point in the suffrage movement and put the issue on the map in a brand new way. 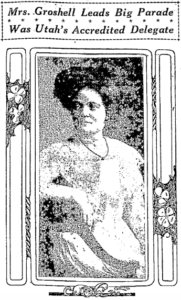 What role did Utah women play in this parade? Edna Groshell, a Utah suffrage leader and former president of the Woman’s Democratic Club of Salt Lake, led Utah’s delegation (marchers were organized by state and profession). We don’t know how many other Utahns made the journey to Washington, D.C. to join in. 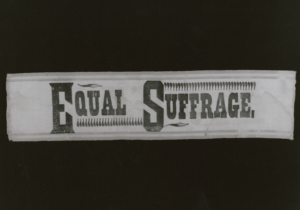 Although suffrage parades were relatively new to the national movement in 1913, Utah women had marched decades earlier in support of voting rights. In the early 1890s, many local Woman Suffrage Associations joined 4th of July and 24th of July parades in their towns to bring attention to their cause. Members of the Beaver County Woman Suffrage Association made this and other banners to decorate their “suffrage carriage” in Beaver’s 24th of July parade in 1894.[1]

Nearly two decades later, Utah suffragists took to the streets again. This time, they were pushing for a federal amendment for women’s suffrage. After the 1913 parade in Washington, D.C., Alice Paul and other young suffragists broke away from NAWSA to pursue more direct and disruptive action to win the vote. Their National Woman’s Party (NWP) knew the importance of publicity and held many parades in D.C. Suffragists walked down the streets decked out in the iconic purple, white, and gold sashes. These were spectacles designed to get suffrage in the newspapers and keep the issue in front of the American public. That would also put pressure on politicians, who had previously been able to dodge the issue because reporters didn’t ask them about it. 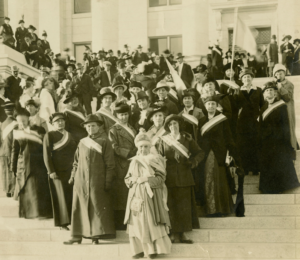 Utah suffragists worked with both NAWSA and the NWP to pass the 19th Amendment. The Utah NWP chapter, led by Margaret Cherdron, held several parades in Salt Lake City to welcome national suffrage leaders and show their elected Congressmen and Senators that they expected their support. This picture was taken on the steps of the Utah State Capitol in October 1915. Utah suffragists, led by Emmeline B. Wells, greeted suffrage envoy Sarah Bard Field and others who were driving a suffrage petition cross-country from San Francisco to Washington, D.C. It wasn’t the first time—and it wouldn’t be the last—that Utah women had taken to the streets to show their support for the cause of women’s voting rights.