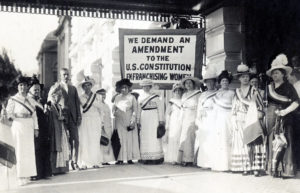 We’ve described Utahns’ relationship with NAWSA in a previous post, but Utah suffragists also worked closely with the NWP and its predecessor, the Congressional Union (CU) for Woman Suffrage. Alice Paul and Lucy Burns co-founded the CU as a NAWSA auxiliary organization to lobby Congress for a federal suffrage amendment, but they split from NAWSA in 1914 to pursue more radical tactics. Paul’s goal was to attract more publicity to put pressure on Congress. (Read more here about the color scheme she adopted for a visual language of suffrage.)

Utah suffragists organized a CU chapter at a convention in the summer of 1915, with Margaret Cherdron as state chair and a committee including former legislators Annie Wells Cannon, Alice Merrill Horne, and Lily C. Wolstenholme. Alice Paul was excited by the “enthusiasm and interest” she found in Salt Lake City, and Utahns were some of the most enthusiastic supporters of the CU and its efforts for parades and other spectacles to gain newspaper coverage.[1] When CU envoys drove a suffrage petition across the country from San Francisco to Washington, D.C., Utahns gathered on the steps of the State Capitol and trotted out political leaders to welcome them.[2] 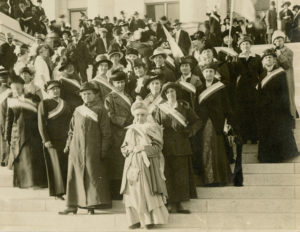 The CU officially became the National Woman’s Party in 1916, and the Utah NWP branch held monthly meetings in its headquarters on Salt Lake City’s Main Street to plan rallies, raise funds, and support national lobbying efforts. One of the most prominent NWP supporters was Utah Senator George Sutherland, who often spoke at NWP rallies in DC, welcomed suffrage parades at the steps of the Capitol, and introduced the “Susan B. Anthony Amendment” into the Senate in 1915 (one of the many times it failed to pass).[3] 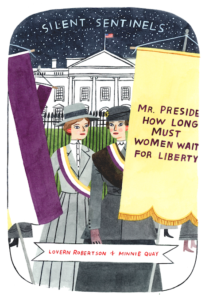 Some Utahns also participated in the NWP’s most controversial move in 1917. Alice Paul initiated an unprecedented picketing campaign at the White House. These protestors, called “Silent Sentinels,” held large banners appealing to President Wilson for women’s rights. Salt Lake City suffragists Minnie Quay and Lovern Robertson joined the picket line on November 10 and were among the dozens of suffragists arrested that day for “obstructing traffic.” They were sentenced to prison and held in the Occoquan Workhouse in Virginia, where they were victims of violent treatment during the “Night of Terror.”

This mistreatment won public sympathy for the cause, but some Utah suffragists were horrified at the NWP’s protest. Emily S. Richards and Hortense Haight Nebeker published a letter denouncing the picketing and terminated Minnie Quay’s membership in the Woman’s Democratic Club (a NAWSA affiliate).[4] They did not mention Lovern Robertson, likely because she was a Socialist and not a member of their organization.

This division in Utah characterized the NAWSA/NWP split through 1920. Some women felt it was important to maintain respectability and build relationships with elected officials, while others, mainly younger women, felt that strategy had stalled for decades and that public pressure was the only way to persuade men to share political power. In the end, both could claim some credit for the ratification of the 19th Amendment.

Read more here about Utah suffragists’ place among rival suffrage organizations in the 1870s and 1880s, and explore our blog to learn about other topics that interest you!