In honor of National Voter Registration Day this week, let’s take a look at Utah women’s involvement in voter registration over the years. 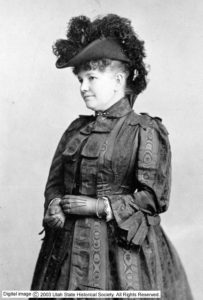 When Utah was becoming a state, women hoped to regain the right to vote that Congress had taken from them in 1887. Ogden resident Sarah E. Anderson “was eager to have a voice in government when the Utah state constitution was up for ratification in 1895.”[1] Male delegates had drafted a proposed constitution in the spring that restored women citizens’ right to vote, but the constitution had to be approved by both Utah voters and Congress. Anderson argued that Congress’ act inviting Utah to apply for statehood did not specify that only men could vote on the state constitution, so she had the right to cast a ballot as well. When the Ogden registrar refused to add her name to the voter rolls, she sued and won.[2] Eventually, the territorial Supreme Court decided that the Enabling Act had not enfranchised women. They would have to wait to cast ballots until after statehood was official.[3] But Sarah Anderson didn’t lose sight of her agenda for change. She won election to the state legislature in 1896, the first election where women citizens could both vote and run for office in Utah. 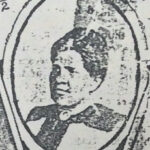 Alice Nesbitt and Elizabeth A. Taylor worked during the early years of Utah statehood to ensure that they and their fellow Black women could register and vote in elections. As leaders in the “Colored Women’s Republican Club,” they organized rallies and even went door to door to campaign for their preferred candidates. Women of color often had to overcome social barriers to participate in politics, even though Utah law did not restrict their voting rights on paper. One rally of the Colored Women’s Republican Club “emphasized the necessity for registering [to vote], and to beware of statements made by certain registrars that colored ladies, as well as working girls, were not entitled to register.”[4] Despite this discrimination, both women persevered to actively engage in politics, especially supporting Black women and men’s efforts to register and vote.[5]

Women have also served as election officials overseeing voter registration in Utah counties. For example, 24-year-old Minnie Crouse was appointed a registration agent in her district of Daggett County in 1906.[6] Her responsibilities included going door to door in September to register voters (who had to swear an oath that they were eligible) and holding open office hours for registration on Saturdays. She also had to post voter lists in public places so voters could correct any mistakes.[7]

Other women in Utah history recognized the importance of voting and worked to help others register. Back when voting materials were only printed in English, Hispanic community leader Edith Melendez would go with Spanish speakers to the county clerks’ office so she could translate the forms for them. She also provided rides to polling places on election day. And Alberta Henry led voter registration drives as Salt Lake NAACP president to increase registration and turnout among Utahns of color. 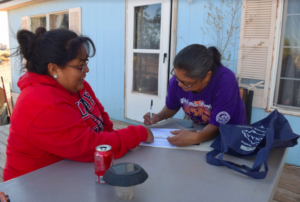 Voting is vital for democracy, and it’s important that every citizen has the opportunity to register! But that process is often complicated and there are structural barriers that still make registration and voting difficult, especially for rural Utahns and people of color. Two local non-profits are working to fix these disparities. Voterise smooths the process and conducts outreach at high schools and community events to register new voters. The Rural Utah Project has partnered with Google on a program to assign addresses to homes on the Navajo Nation, which aids in emergency services and voter registration.

In 2015, Utah ranked 43rd among states for the percentage of eligible women registered to vote.[8] This has improved in recent years, but experts estimate there are still 300,000 eligible women voters in Utah who aren’t registered. In this historic year with voting rights anniversaries and an election, we hope you’ll make your voice heard in government and help everyone around you to do the same!