Ivy Baker Priest and Reva Beck Bosone are two Utah politicians who served in national leadership roles on opposite sides of the political aisle. Campaigning for elected office, particularly as a woman in Utah, is no easy feat; while Utah’s women have long been politically active, they make up just 24% of the Utah State legislature. This is the highest percentage to date, but still under the national average. Nationally, we have never sent a woman to the Senate, and we have sent only 4 women to the House of Representatives.  What does a historical look at some of Ivy Baker Priest and Reva Beck Bosone’s campaign literature tell us about women running for office in the first half of the 20th century? 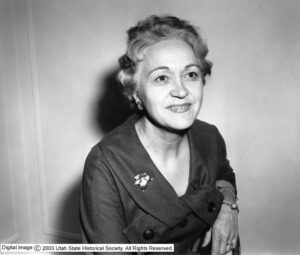 Ivy Baker Priest (1905-1975) was born in a small mining town into a mining family. Inspired by her mother’s involvement in local politics, Priest started participating in the Utah Young Republicans, and held positions of increasing responsibility in the Utah Republican Party. She was elected a delegate to the Republican State Convention in 1932 and represented Utah as a delegate at the National Republican Convention in 1948. 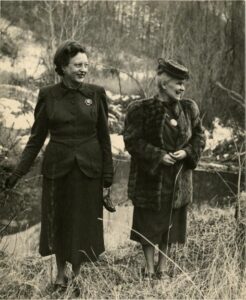 Reva Beck Bosone (1895-1983) was born in American Fork, the daughter of a Danish immigrant and a descendant of Mormon pioneers. Like Priest, Bosone was inspired by her mother who reminded her that “a country is no better than its laws—if you want to serve all of the people, go where the laws are made.” Bosone enrolled in the University of Utah College of Law, graduating in 1930. She was elected to the Utah State House of Representatives in the early 1930s, and elected as the first woman judge in Utah in 1936. Bosone picked up her career in politics again in the late 1940s, becoming the first woman Utah elected to the U.S. House of Representatives.

Materials from each woman’s campaigns for office are now on display at the Utah Museum of Fine Arts ACME Lab in an exhibit titled Utah Women Working for Better Days! The exhibit, collaboratively developed by Better Days 2020, the Utah Museum of Fine Arts, and J. Willard Marriott Library’s Special Collections, is open through December 6, 2020. Find more information about visiting UMFA here. 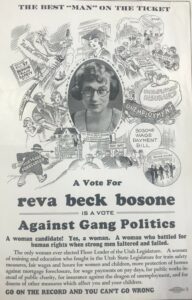 These campaign documents, on loan from the Marriott Library’s Special Collections, illustrate some of the challenges of running for office as a woman in the 20th century. Neither Bosone nor Priest could avoid talking about their gender, and both realized that they must address the “elephant in the room” in their campaign literature.

The documents illustrate each woman’s differences in approach. Bosone directly addressed the issue in one of her early campaigns in 1935. The caption on the poster below reads, “A woman candidate! Yes, a woman. A woman who battled for human rights when strong men faltered and failed.” The poster is illustrated with images that highlight her education at the University of Utah, and the text highlights her political accomplishments without mentioning her personal life. This particular campaign for City Commissioner was ultimately unsuccessful. 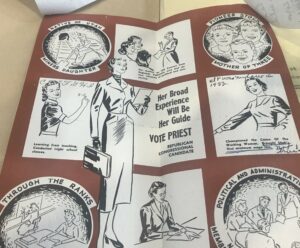 Both items from University of Utah Marriott Library Special Collections. 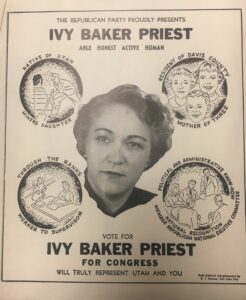 In the campaign documents to the left, Ivy Baker Priest highlights her role as a daughter and a mother, and her background as a native Utahn and miner’s daughter. The first flyer describes her in the header as “human,” implying possibly, that she is not “different” as a woman. Her roles as a mother, miner’s daughter, and worker, rather than her expertise, make her a “true representative” of the people of Utah and worthy of the vote. This particular piece of ephemera is fascinating because it comes from Priest’s campaign against Bosone in the 1950 election to represent Utah’s 2nd District in the U.S. House of Representatives. Priest presents a stark contrast, and perhaps a direct rebuttal, to Bosone’s academic and professional achievements.

Fascinatingly, the piece of Bosone’s later campaign literature to the right [not included in the exhibit] also adopts this language. It notes briefly that she was a mother, tax payer, and homeowner, and of pioneer stock, although these appear to be sidenotes in the long list of her academic and professional accomplishments in law and the legislature. This particular piece of ephemera is likely from either her 1948 or 1950 campaign for the 2nd District seat and one wonders if these brief modifications are also a response to Priest’s campaign literature.

When Ivy Baker Priest and Reva Beck Bosone faced off in the 1950 election for the U.S. House of Representatives, both were eminently qualified for office. Priest was the Republican candidate against the incumbent Democrat Bosone. As the only national race with two women squaring off for national office, the race attracted widespread attention. Although Bosone ultimately won, Priest’s campaign was noted nationally and she was appointed Treasurer of the United States by Dwight Eisenhower in 1953. Priest was the second woman to hold that office, which has been held by a woman ever since.

Both Priest and Bosone understood the necessity of addressing gender in their campaign literature, which was certainly not obligatory for a man running for office. Although these documents are from the 1930s to the 1950s, the U.S. has yet to elect a woman or woman of color as president or vice president. While contemporary candidates may not explicitly state like Bosone in 1935, “A woman candidate! Yes, a woman.,” look closely at the next campaign ads that run across your TV screen or get delivered to your mailbox. What are the differences that you see in how men and women candidates present themselves in 2020? How does today’s campaign literature compare to Ivy Baker Priest’s and Reva Beck Bosone’s?