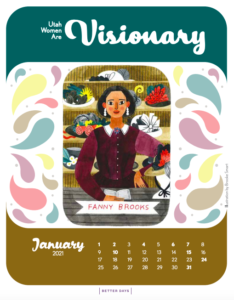 As we celebrate the 125th anniversary of Utah statehood this year, we’ll highlight women each month who shaped our state. In January, we’re featuring visionary women—who could see better days in the future and worked to get us there.

Fanny Brooks was the first Jewish woman to make her home in Utah. Energetic, diplomatic, and resilient, she was a successful businesswoman in Salt Lake City. When Brigham Young forbade Mormons from doing businesses with those of other faiths in 1868, Brooks wasn’t willing to give up. She demanded a meeting with Young and convinced him to let her business continue. Read more here, and find other stories below!