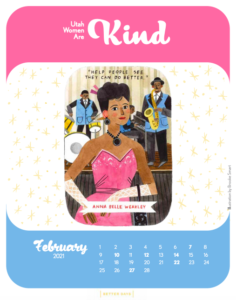 For February, we’re featuring women who made Utah a better place through kindness. We’ll highlight women on our social media who helped others feel welcome and reach their full potential.

February is also Black History Month, so we’re excited to feature Anna Belle Weakley on our calendar page! Anna Belle ran the Porters and Waiters Club in Ogden, known as the finest Jazz club in the west. At the club, she created a space where everyone felt welcome to break down barriers of racial segregation. Anna Belle later earned a college degree and ran programs treating alcoholism.