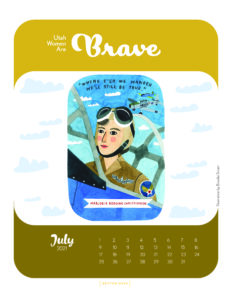 This month’s featured woman is Marjorie Redding Christiansen, a member of the Women Airforce Service Pilots during World War Two. As a WASP, Marjorie flew non-combat missions for the Air Force like testing repaired planes and flying troops. This freed up more male pilots for combat.

Marjorie’s brave service wasn’t fully recognized at the time. It wasn’t until 1977 that she and other WASPs were granted veteran status. Marjorie died one year before WASPS were awarded the Congressional Gold Medal. We’re proud to honor her this month!

Other brave Utah women we’re featuring this month include:

And more! Follow our social media @betterdays2020 to catch all the stories.