It’s been 125 years since Dr. Martha Hughes Cannon made history as the country’s first female state senator. Utah chose to send a statue of her to represent our state in Washington, D.C., but the pandemic delayed her planned installation in 2020. Her statue should make it to our nation’s capital this year, so we’re giving her a proper sendoff! 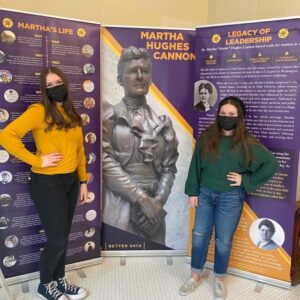 Martha’s statue by local sculptor Ben Hammond is currently in the State Capitol awaiting the final nod to head to D.C. But a smaller version of the statue is criss-crossing the state as part of our traveling “Legacy of Leadership” exhibit, with informational panels, timeline posters, illustrations, cutouts, and more. Scroll down to see where Martha’s headed next, or request to host the exhibit here! Educators and community hosts can request a free digital toolkit here with lesson plans, primary source sets, activities, and swag. 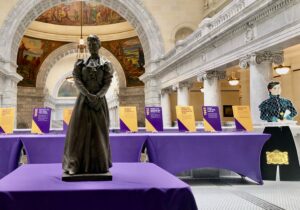