Lifting As We Climb 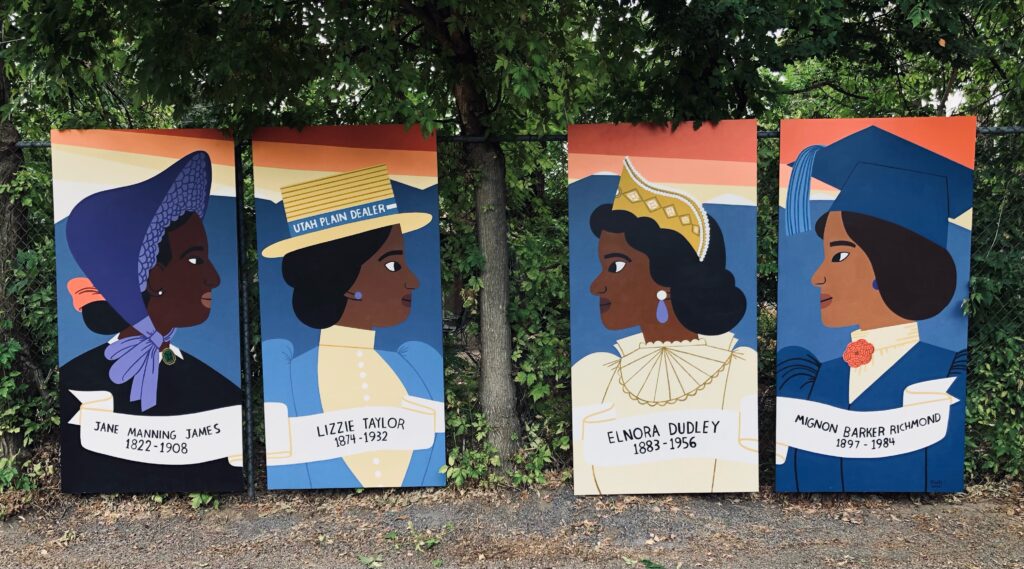 Sema Hadithi Foundation Director of Special Events Alice Faulkner Burch convened local residents and Black community leaders to choose who would be featured in the mural. They selected four women who lived in Richmond Park’s Central City neighborhood at different times in history. As mural artist Brooke Smart explained at the unveiling, the mural shows each woman wearing a hat that represents part of her story. Jane Manning James wears a 19th-century bonnet, Lizzie Taylor wears a newspaper hat, Elnora Dudley wears her Emancipation Day crown, and Mignon Barker Richmond wears a graduation cap and tassel. The title, “Lifting As We Climb,” is a nod to the motto of the “National Association of Colored Women” (the term used at the time), a Black women’s organization that advocated for women’s rights during the lifetimes of each of these Utah women. Each woman also wears some purple, historically associated with royalty and with Black women’s organizations. 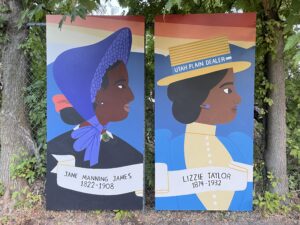 Jane Manning James was the first Black woman to live in Utah, arriving with other Latter-day Saint pioneers in September 1847. Jane was very active in the LDS women’s organization called Relief Society and conscious of the responsibility she had to represent the Black community in Utah. She advocated for equality by repeatedly asking church leaders to allow her to participate in temple ceremonies that were off limits to Black members at the time.

Elizabeth “Lizzie” Taylor was a newspaperwoman and leader in Utah’s growing Black community at the turn of the 20th century. She ran the Utah Plain Dealer with her husband William, and she also started her own paper, The Western Women’s Advocate, when she founded an organization for Black women in the West. She canvassed for political candidates and encouraged Black women to register and vote.

Elnora Dudley was crowned queen of Utah’s Emancipation Day celebrations in 1898. A precursor to today’s Juneteenth celebrations in Utah, Emancipation Day was held in September. It was an opportunity to commemorate the end of slavery and showcase the talent and strength of Utah’s Black community. Elnora was just 15 when she presided over the festivities. The ruby in her tiara in the mural represents her great worth, as Alice Faulker Burch said at the mural unveiling.

Mignon Barker Richmond was the first Black woman to graduate college in Utah (from what is now USU). One of her many accomplishments was starting the first school lunch program for the Stewart School at the University of Utah, where teachers-in-training worked with young students. Richmond Park at 444 E. 600 S. was dedicated in 1986 with a plaque honoring her as an educator, civil leader, and humanitarian.

In 2020, local nonprofit Wasatch Community Gardens opened a community garden in the park where local residents can sign up for a garden plot. It’s a fitting tribute to Richmond’s legacy of serving the community and professional food services! Due to COVID, the garden’s official opening happened in summer 2021, and that kicked off our efforts to find grants and funding for a mural in the community garden. The mural was officially unveiled on June 27 in a fantastic celebration with the Sema Hadithi Foundation, Calvary Baptist Church choir, and KUTV2 news anchor Jamie McGriff. Brooke’s artwork is now permanently installed on the Wasatch Community Gardens fence.

Many thanks to Wasatch Community Gardens for allowing the mural to be placed inside the garden, and the Sema Hadithi Foundation for directing the art and historical content!

P.S. In 2003, this local Martin Luther King, Jr. Day column also highlighted Mignon Richmond. The only problem? With nothing on the plaque at Richmond Park to indicate her gender, the writer assumed the person honored there was a man – oops! To his credit, he did print a correction. But that mistake says a lot about why we need more parks, streets, and buildings named after women! Until we’re just as likely to think of women as we are of men in our history, there’s work for us to do.