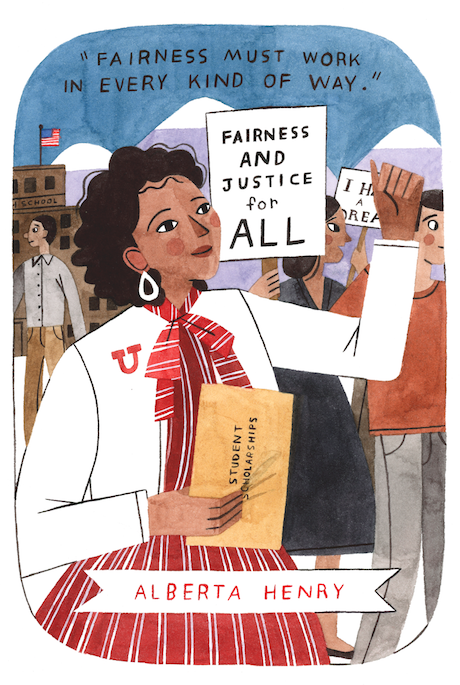 “Fairness must work in every kind of way.”

Nothing that was unfair went unnoticed by Alberta Henry. A feisty woman of small stature who played a major role in the fight for fairness and racial equality in Salt Lake City, Alberta was one who recognized problems of racial injustice and worked to solve them in many different arenas and in every kind of way. Alberta was an educator, community activist, and longtime President of the Salt Lake NAACP who gained the reputation as one of Utah’s most noteworthy community leaders. 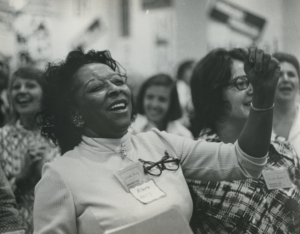 Alberta Henry was born in Shreveport, Louisiana on October 14, 1920, to Julia and James Hill. She was one of four children, three girls and a boy. At that time, Alberta’s parents were sharecroppers on a farm in a small town near Shreveport. As a young girl, Alberta, would observe her mother Julia’s spirit and courage in standing up for what was right. Julia did not have a problem with speaking out against injustice. Alberta’s only brother, David once described how she was much like their mother; “aggressive, authoritative, and usually right.”[1] Throughout her life, Alberta utilized her mother’s characteristics to address fairness and seek better opportunities for Black people.

Wanting their children to get a better education than what was available to them in Louisiana, Alberta’s parents moved the family to Topeka, Kansas in 1923. There, Alberta attended school and did quite well. As a young teen, Alberta and a friend were given a ride to a football game and the car they were in was hit by a drunk driver. Alberta suffered an injury to her face and eye and had to be taken to the hospital. Here, even with her serious medical needs, she noticed the absence of Black doctors and demanded to be seen by one. This was a clear example of Alberta’s ability to address fairness and racial injustice, speak out and seek opportunities for Black people. Although her grandmother Susie Barnes predicted it, Alberta had no idea that community activism and fighting for injustice would be her life’s work.

After graduating from high school in 1939, Alberta attended the Youth Works Project Administration where she learned skills in cleaning, cooking, sewing, and shopping. Through her friendship connections, Alberta landed a job working in a theater. Working as a cashier, she soon became an assistant manager. While working at the theater she was introduced to a friend’s cousin, Gooch, the man she married in 1941. Gooch was in the Army and they soon relocated to San Luis Obispo, California. After Gooch left the army, the couple moved back to Topeka and invested in a small café. 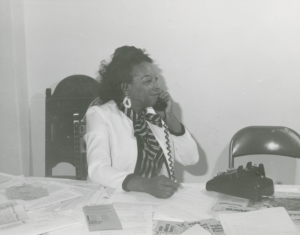 Alberta suffered a sudden and near fatal appendix rupture in 1948 that caused a scare for her family. Uncertain of her recovery, she was cared for by her doctor, friends, and family for over six months. Alberta was also a woman of faith. As a young woman she had attended her grandfather’s church and taught Sunday School, and she longed to be a missionary to help others in Africa. During her recovery, Alberta received a vision and message from the Lord assuring her that she would not die because there was work for her to do. Little did she know at the time that the work was in Utah!

Soon after recovering enough to get back to work in the café, Alberta divorced Gooch and was invited by a friend to move to Salt Lake City. In 1949, Alberta headed to Utah for a visit, intending to stay only a few weeks. However, she felt drawn to Utah and soon realized this was where she was supposed to be.

After settling in her new environment, Alberta began searching for a job in Salt Lake City. Facing racial discrimination in her job search and an explicit “we don’t hire coloreds” from many employers, Alberta soon found work as a housekeeper. Domestic service work was basically the only job open to women of color at that time. Alberta was hired by Helen and Wally Sandack and soon became an integral part of their family. The Porters ’and Waiters’ Club in Ogden was a popular social outlet for Blacks during this time. Here she met Harold Henry. They were married in 1950 and later adopted two children, Wendell and Julia. 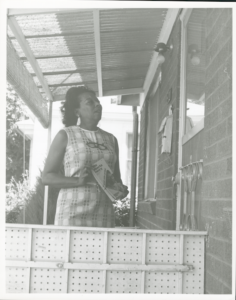 Staying grounded in her religious faith, Alberta attended church at Pilgrim Baptist Church and began her long desired missionary work. She was ultimately elected President of the Utah and Idaho Missionary Society. Alberta learned many skills through her experiences and keen observation. As she moved about the community, her commitment to fairness in every kind of way allowed her to use her talents to problem solve and fight the discrimination she observed. However difficult the challenges that Alberta confronted, her faith strengthened her understanding that she had a purpose in Salt Lake City, one of addressing fairness and seeking better opportunities for Black people. She later joined Calvary Baptist Church and continued her missionary and civic work there.

In the early 1960s, Alberta noticed the educational issues of Black students. Recognizing the need for more students to graduate high school and go to college, she focused on finding scholarships to help pay for educational expenses. Her ability to problem-solve enabled her to bring together people from different sectors including churches and wealthy businessmen in the community to raise funds for college expenses. This project led to the development of a more formal organization which the donors insisted be named after her. Thus, the Alberta Henry Education Foundation was incorporated as a nonprofit organization in 1967. This organization awarded scholarships for low income and minority students in the community.

Alberta’s involvement in her church and education arenas provided connections that would have lasting effects. Her friendship with Mignon Richmond, a prominent leader in the Black community and the first African American woman to graduate from a college in Utah, opened doors and opportunities for her in a broader sense. Alberta immediately became involved in the local National Association for the Advancement of Colored People (NAACP) and worked with the youth to support their educational endeavors as well as promoting ways for students to have a positive self-image. She formed the “Soul Sisters Drill Team,” who went on to win regional awards within the NAACP organization.[2] This was another example of Alberta’s ability to create opportunities for others and problem-solve for the community.

Alberta soon gained more community support and recognition for her quick response and problem-solving abilities. In 1967, Alberta was hired as an aide for the Head Start program in Salt Lake City where she proved to be a very capable and skillful aide. Although she didn’t have a college degree or formal training, she was given her own classroom to teach. Her involvement in education and her responsiveness to the community led to her being appointed to various civic and educational committees. When the University of Utah extended an invitation for her to accept an honorary doctorate from the university in 1971, she became the first Black person to receive such an honor at that institution.[3] 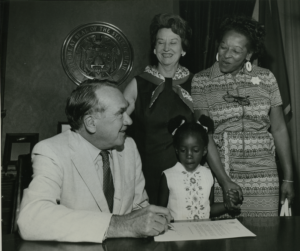 Alberta continued her work addressing concerns of fairness throughout the community. Once again, she turned her attention to the difficulties Black students were having in schools. In 1972, when the Salt Lake City School District was dealing with a racial incident at one of the schools that caused community unrest, Alberta was summoned by community members to help. In addition to other racial issues, there was concern that there weren’t black teachers in the district. Her commitment to equal education opportunities continued to motivate and energize her. In a Salt Lake Tribune article in 1975, Alberta said,” My primary concern is seeing that anyone, any color, gets an education if he or she wants one.”[4]

By 1980, the Salt Lake City School District Superintendent of Schools, Dr. Donald Thomas, hired Alberta as a liaison between the district and the Black community. She was the first African American employed by the district. In addition to continuing to resolve issues between the schools and the community, one of her first tasks was to start recruiting black teachers. Once these teachers were hired, Alberta met with them monthly to provide support and mentorship. Not only was Alberta a champion for Black teachers across the school district, she recognized the need for Black students to receive encouragement and recognition for their achievements. She established a Black Honor Society organization for high school students. Recognizing the need to be more inclusive of other students of color, the organization was later changed to the Rainbow Honor Society and provided resources and enrichment opportunities such as travel to out-of-state events. 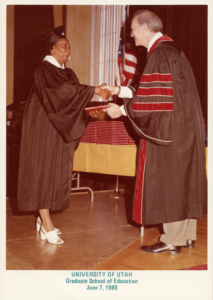 Recognizing Alberta’s value to the district, Dr. Thomas encouraged Alberta to obtain her bachelor’s degree to enhance her work. Alberta earned her Bachelor of Science degree in 1982 from the University of Utah. Alberta’s reputation for fairness and justice was demonstrated in the many disputes and conflicts that she helped to resolve. As she moved about the community, she always insisted on hearing all perspectives. It was her practice to create understanding on all sides of the issue, as she had said, “Fairness must work every kind of way.”[5] Alberta retired from the district in 1986, but she continued to influence issues of fairness and justice in many ways and in different arenas. She served on numerous boards and committees throughout the state, as well as serving as President of the Salt Lake Chapter of the NAACP for 12 years.

Alberta died of cancer in 2005, but her legacy continues today. The Alberta Henry Scholarship Foundation is still providing resources for low income and Black students and has provided scholarships and resources for hundreds of students. Utah is a better place for all because of Alberta’s dedication to fairness and justice.

Other accomplishments and board memberships of Alberta Henry:

Dr. Kathleen Christy is a retired educator of 42 years. She has served as a classroom teacher and administrator. Her passion for educational equity has guided her career and accomplishments, resulting in her receiving numerous awards and recognition.

[4] Davis, France. (1997). Light in the Midst of Zion, A History of Black Baptists in Utah. Empire Publishing.