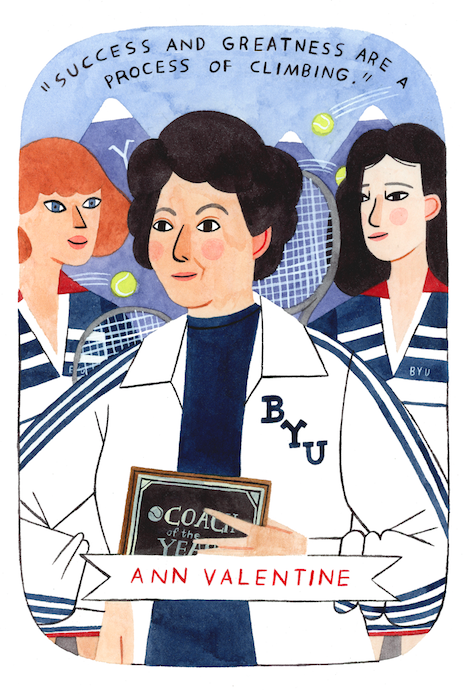 “Success and greatness are a process of climbing.”

Ann Valentine was an award-winning coach who fostered women’s athletics in Utah. Having faced difficult circumstances in her early life, she inspired her players to do better and be better while building a nationally-ranked program and raising the profile of women’s sports in the NCAA.

Antoinette Maria Valentine was born in Sykesville, Pennsylvania on January 1, 1932 to Italian immigrants Carmine and Eluisa Maria Fratto Valentine. The ninth of ten children, Ann lost her father to a coal mining accident when she was four years old. After her mother died of suicide, eleven-year-old Ann and her other siblings at home were raised by her oldest sister, Fran. Although relatives had offered to take the younger children into their homes, Fran was determined to keep her siblings together. They came up with a plan for each one to help support the family financially, finding jobs at the grocery store, delivering newspapers, and cleaning homes and businesses.[1] They were able to scrape by, and Ann and her siblings remained very close throughout their lives. 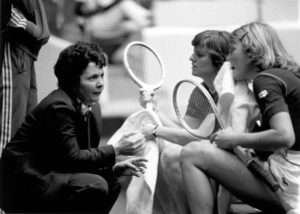 Ann got her start athletically by playing football, basketball and other sports with her brothers at the local Catholic school where they traded the school janitor for gym time by putting away folding chairs. A doctor in town gave Ann her first tennis racket at age 14, which started her lifelong love of the sport. She eventually became a four-sport athlete at Slippery Rock University, playing tennis, volleyball, basketball, and field hockey. Ann was named the No. 1 player in both singles and doubles, and only lost one tennis match during her college career.[2]

After earning her bachelor’s degree in physical education, Ann went on for a master’s degree at Pennsylvania State and post-graduate studies at the University of Pennsylvania. She moved to Utah in 1965 seeking a healthier climate and began coaching the women’s tennis team at Brigham Young University in 1969. She later recalled that at the time, the BYU team “was a glorified sports day program. I had to be very creative in trying to get some of the top teams in the country to make the trip here to BYU.”[3] She was persistent in fostering the BYU program and advancing women’s intercollegiate athletic competitions. She started the first Mixed Team Collegiate Tournament at BYU, as well as the first national indoor round-robin team competition. 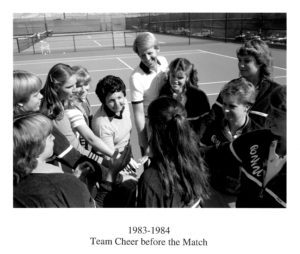 In her 23 years as a coach, Ann amassed the second-winningest record in NCAA Division I tennis history with 71% wins. Her teams won 15 conference championships and were ranked in the top 20 nineteen times. She expected her players to demonstrate integrity, encouraging them to leave the court a better person and thank those who supported them. She was also a master of strategy who painstakingly prepared for matches. “Don’t get discouraged by failures,” Ann would often say, “Remember that success and greatness are a process of climbing.”[4]

Ann was a twelve-time conference coach of the year and won the Wilson/ITA Central Region Coach of the Year award four times, as well as the Rolex Meritorious Service Award. She stepped down from coaching in 1995 to become BYU’s Association Director of Women’s Athletics, where she continued to champion women’s sports–adding women’s softball and soccer teams, and developed funding, facilities and organization to support the growth of women’s teams nationwide. 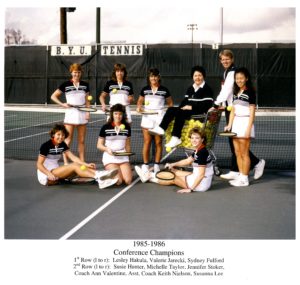 Ann was a generous friend, sister, and aunt, often bringing her large extended family together for holidays and celebrations. She was loyal to her friends and often took them with her on her trips for tournaments or recruiting. She was inducted into the BYU Hall of Fame, the Women’s Collegiate Tennis Hall of Fame, and the Utah Sports Hall of Fame. Her induction into the BYU Hall of Fame noted that “personally and professionally Ann Valentine is an individual whose lifestyle turns coal into diamonds. She has lifted and she has learned; she has taught and she has loved, changing for the better all who have called her “coach,” “colleague,” “professor,” or “friend.””[5]

Ann passed away in June 2018. A Women’s Tennis Scholarship Fund has been established in her name at BYU.

We are indebted to Norma Bertoch and Olivia Rojas for sharing information about Ann.

[3] “Former Coach and Administrator Steps Down after 38 Years.”