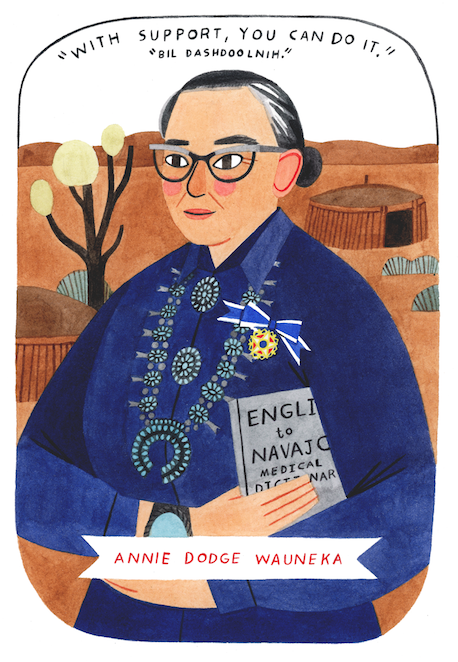 “With support, you can do it.”

by Naomi Watkins and Katherine Kitterman with Farina King

Annie Dodge Wauneka was born into the Tse níjikíní (Cliff Dwelling People) Clan of the Navajo Tribe as daughter of K’eehabah and Henry Chee Dodge. When the Indian boarding school on the reservation that Annie attended was hit by an influenza epidemic, she came down with a mild case while many of her classmates died. Her quick recovery allowed her to help care for the sick, influencing her life’s work in public health. 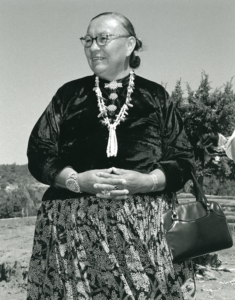 Annie attended tribal council meetings with her father, a wealthy tribal leader, and traveled the reservation with him throughout parts of Arizona, Colorado, New Mexico, and Utah, observing poor living conditions and the spread of disease. She viewed education and leadership as the best ways to make improvements. She earned a degree in public health from the University of Arizona and ran for office on the Navajo Tribal Council, becoming the second woman elected. In a later election, she defeated her husband, George, to keep her position. She would serve seven terms and raise six children with her husband as he continued to run a ranch owned by her father.

As a tribal leader, Annie chaired the health committee, launching public health campaigns about sanitary conditions, clean drinking water, alcoholism, influenza, and tuberculosis (TB).  Since the Navajo language didn’t include translations for many medical terms, she created an English to Navajo medical dictionary to make healthcare more accessible and less intimidating to Navajo patients. She also encouraged the Public Health Service and hataałii (Diné traditional healers) to work together and appreciate the others’ knowledge and contributions. On her weekly radio show broadcast in Navajo, Annie shared information about disease prevention and treatment. 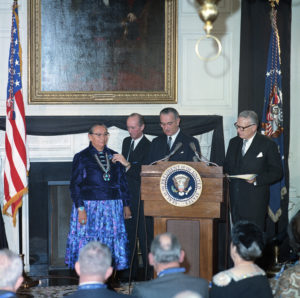 President Lyndon Johnson awards Annie Dodge Wauneka the Presidential Medal of Freedom in 1963. Courtesy of the Lyndon B. Johnson Library.

Annie’s work was not limited to the reservation. A Girl Scouts leader, she also served on national advisory boards of the U.S. Surgeon General and the U.S. Public Health Service. She was awarded the Presidential Medal of Freedom, received two honorary doctorate degrees, and was inducted into the National Women’s Hall of Fame. An intelligent and confident advocate, the Navajo council honored Annie as the legendary mother of the Navajo people.

Farina King, Ph.D. is Assistant Professor of History and affiliate of the Cherokee and Indigenous Studies Department at Northeastern State University.