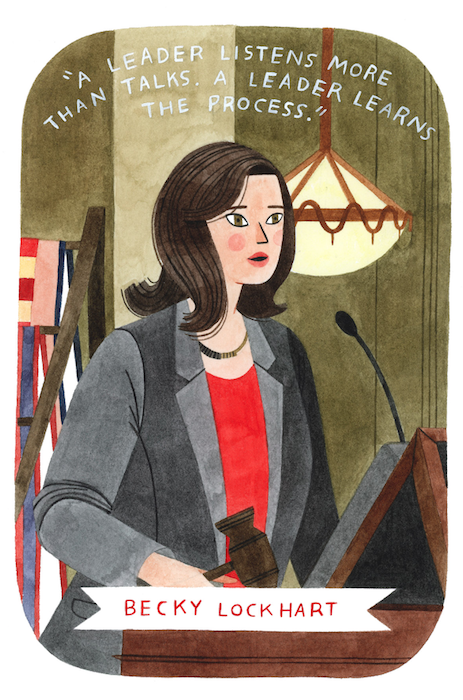 “A leader listens more than talks. A leader learns the process.”

Rebecca D. Lockhart (Becky) was a smart young mother with a shy personality who avoided any type of public speaking. But when she and her husband learned that elected officials had planned a change that would negatively impact their neighborhood, she had to speak up. They met with county commissioners to explore other ideas and they mobilized neighbors. A new idea emerged that met everyone’s needs better. Had she not become involved in the process, the original plan would have been implemented. That was when she learned the power of voters to make a difference. With that taste of politics at work she dreamed about someday running for the legislature, maybe when she was a grandma.

Not long after that, the seat for their legislative district opened up in the middle of a term and her husband Stan’s name got submitted for the appointment. When it didn’t work out for him, the committee considered Becky instead. She rose to the top as the committee’s #1 choice, but someone else was appointed.

Now Becky realized she wanted to be in the Legislature, so she ran for her district’s House of Representatives seat. Voters elected her by a landslide and she was always glad she got there through the regular election process.

Becky Lockhart was just 29 years old, working as a nurse, and had 3 young children at home. It was not ideal timing in her life, but she had felt the call of purpose and she answered. Her husband, Stan, picked up the slack at home during the session.

Once in the House of Representatives, she studied the political process and read every bill, something few representatives ever took the time to do. Colleagues came to respect her thoughtful opinion on tough issues, and they encouraged her to run for a leadership position. She did, but lost. It hurt.

Putting herself out like that caused the current Speaker of the House to notice her, and he appointed her to chair an important committee. This is when she learned that it does not matter what position you hold, what matters is being at the table when decisions are made. In this role, she had a real impact and learned what it really takes to get a bill passed and funded. She became an expert on transportation, healthcare, and immigration. 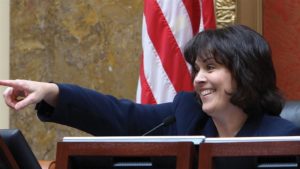 She ran for leadership and lost again two years later. She ran a third time and was again defeated. It always stung, but she kept throwing herself back into the work. Each time she lost the leadership race, she was appointed to be the chair of important committees.

Finally, ten years after being elected to the House, she made it into an elected leadership position.

Her excitement at winning did not last long when she realized she was an outsider in the leadership club. Power was being guarded by a few men. She was troubled by this, believing that everyone should participate and that a balance of power makes our constitutional system work.

Then, something happened that she and her colleagues believed was not right. Fellow representatives urged her to challenge the current Speaker of the House for the top leadership position. It was a brave and risky decision but she realized she could no longer be part of the current culture. She would either change the status quo or be defeated and not run again in the general election. Either way she would keep a clear conscience.

Becky Lockhart won that election by a single vote, becoming the first female Speaker of the House of Representatives in Utah. 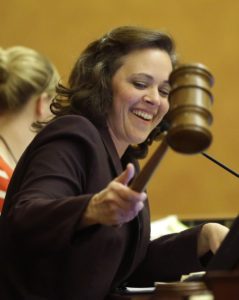 In her very first opening speech as Speaker of the House she said this,

“A leader listens more than talks. A leader learns the legislative process. A leader reads the bills. A leader is a good example. A leader is respectful to Utah citizens who take the time to approach him on an issue…. I encourage lively, energetic and passionate debate. I invite principled stands and the expression of deeply held convictions. I encourage you to be advocates and allies. But above all I encourage you to be statesmen. Because whether you find yourself soaring from victory or grounded in defeat, remember that the people who surround you in this chamber are your colleagues, your friends, your legislative family. We’ll have our differing points of view—but never forget the bonds that unite us to work for policies that benefit the people of Utah. This Capitol and the legislative process will continue long after we are gone, but for this moment we serve together as Utah Representatives within these hallowed walls. It is our obligation to craft the policy and appropriate a budget that is best for the citizens of our great State.”[1]

Becky did restore balance to the House of Representatives and empowered every representative to be heard, even the Freshmen. She was loyal to her House members and they grew to love her for it. She tackled tough issues with grace and fairness.

In that position, she came to understand how important it was for girls and women to see strong female leaders so she took the time to encourage women to reach their potential. She said this,

“Using your real voice might make you uncomfortable. It might make people around you feel uncomfortable, but until we make it normal for women to be heard, until we are heard for our ideas and not viewed as tokens, that’s the price we’ll pay. I, for one, have been willing to pay that price.” [2]

While sometimes called “Utah’s Iron Lady,” friends did not see her personality as rigid or harsh. Instead, they loved her inclusive style, sense of humor and approachability. House Minority Leader David Litvack said, “There was no pretense with Becky…That position of being speaker and position of being elected—not only did that not change her, but it brought out the best in her, her humanness.” Another friend from across the aisle, Jackie Biskupski said, “So, the Iron Lady thing, you know, it’s interesting how we describe strong females. Because there is nothing about Becky that comes across as iron to me. Nothing. She was smart. She had conviction. She made difficult decisions. She was direct. It was rare to see her get angry. She was always listening.” [3]

Perhaps her style could best be illustrated by her love of quilting. After exhausting days, Becky retreated into the sanctuary of her quilting room where she turned on old movies and carefully worked out the puzzle of colors and shapes that—like good government—make a work of art. This craft was a nod to the handiwork done by generations of ancestors whose portraits hung in her office in the Capitol. After countless hours of painstaking work, she generously gave these quilts away to family and colleagues. 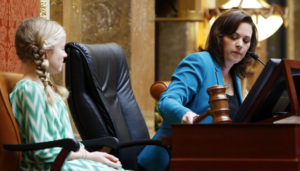 At the height of her success, she had a strange feeling that she had a new purpose to fulfill. Political advisors thought she was foolish for not running again, especially since she did not know what wanted to do next. Then, just a few weeks before her term ended, she began noticing dizziness and other health problems. She was diagnosed with Creutzfeldt-Jacob Disease (CJD), which is always fatal. Just days later Becky Lockhart died in her own home, surrounded by family, and with volunteers from the Highway Patrol keeping constant vigil outside. She passed just days before her final term ended, leaving a legacy of courage and integrity. She was just 46-years-old. It was just enough time to fulfill her purpose.

Rhonda Lauritzen is Becky Lockhart’s biographer and is also the founder of Evalogue.Life. Growing up in a family business inspired her first book and taught her the power of true life stories.